Cong banks on Kisan Panchayats to make inroads in Western UP

Congress General Secretary Priyanka Gandhi Vadra, for instance, is scheduled to address a Kisan Panchayat in Baghra on Saturday and in Mathura on Feb 23. 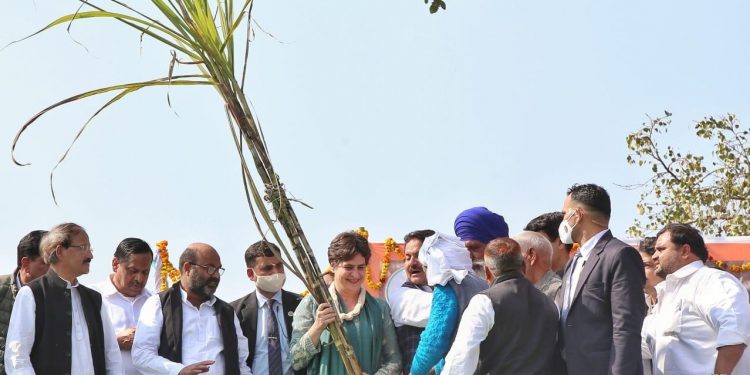 451
VIEWS
Share on WhatsappShare on FacebookShare on TwitterShare on Telegram

New Delhi (Aryavarth) The Congress is trying to make inroads in Western UP which has become a BJP fortress since 2014 and the party is now seeking an opportunity to dislodge it through holding Kisan Panchayats.

Congress General Secretary Priyanka Gandhi Vadra, for instance, is scheduled to address a Kisan Panchayat in Baghra on Saturday and in Mathura on Feb 23.

The Congress has divided the 27 districts of the state into three zones. Ajay Lallu, Aradhna Mishra Mona and Deepak Singh have been assigned the responsibility to galvanise support in these districts respectively.

Many leaders are being roped in from different states including Hardik Patel from Gujarat and Navjot Singh Sidhu from Punjab.

The Congress has begun block-level meetings to highlight the plight of the farmers and Priyanka Gandhi on addressed a farmers panchayat in Bijnore on Feb 15.

Ajay Kumar Lallu, President of the state Congress, said: “Not just Priyankaji, all the leaders have been tasked to highlight farmers’ issues and we will stand with the farmers till the farm laws are withdrawn.”

Priyanka Gandhi, too, will be addressing the farmers issue with all her might.

Congress General Secretary Priyanka Gandhi Vadra had reiterated her support to farmers and slammed the central government saying that those who cannot pay the cost of sugarcane won’t be able to understand the cost of human life.

Addressing a Kisan Panchayat in Chandpur, Priyanka said that Prime Minister Narendra Modi had spent Rs 16,000 crores in buying two aircraft for himself.

“With his money, the entire cane dues of farmers could have been paid. The Prime Minister has money to travel but not for farmers. These farm laws will enable capitalists to fill their coffers but farmers will not get the minimum support price,” she said.

She had said further, “I have not come here to make a speech. I have come here to talk to you. You have reposed faith in Narendra Modi twice because you thought that he would bring prosperity through his policies. But has this happened? Your faith has been shattered because the Prime Minister does not have money for you.”

“When the Congress comes to power again, we will immediately repeal these farm laws. We will also ensure MSP for all farmers,” she had said while addressing a ‘Kisan Panchayat’ in Chilkhana in Saharanpur district.