"Fighting elections in an alliance is also anti-national now. BJP can stitch as many alliances in its hunger for power, but somehow we are undermining national interest by putting up a united front," Mufti said. 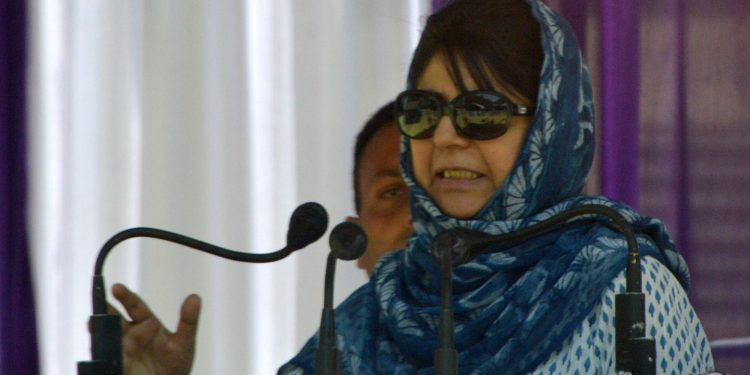 286
VIEWS
Share on WhatsappShare on FacebookShare on TwitterShare on Telegram

Srinagar, (Aryavarth) Former Jammu and Kashmir Chief Minister and PDP chief Mehbooba Mufti said on Tuesday that the BJP is using the ‘Gupkar Gang’ euphemism to project the People’s Alliance For Gupkar Deceleration (PAGD) as anti-national.

In a series of tweets in response to Union Home Minister Amit Shah’s remark that the “Congress and the Gupkar Gang want to take J&K back to the era of terror and turmoil”, she said the BJP has been violating the constitution even as it is blaming the PAGD.

“Old habits die hard. Earlier BJP’s narrative was that the ‘tukde tukde; gang threatened India’s sovereignty and they are now using ‘Gupkar Gang’ euphemism to project us as anti-nationals. Irony died a million deaths since it’s BJP itself that violates the constitution day in and day out,” she said.

She said fighting the District Development Council (DDC) elections as an alliance by parties signatory to the Gupkar deceleration is anti-national for the BJP.

“Fighting elections in an alliance is also anti-national now. BJP can stitch as many alliances in its hunger for power, but somehow we are undermining national interest by putting up a united front,” Mufti said.

She said the BJP has lost focus from the main issues faced by the country and its tactics of projecting itself as the sole saviour of the country are predictable.

“BJP’s stale tactic of dividing India by projecting themselves as saviours and political opponents as internal and imagined enemies is far too predictable now. Love jihad, tukde tukde & now Gupkar Gang dominates the political discourse instead of issues like rising unemployment and inflation,” she saidin another tweet.

Earlier on Tuesday, Shah in a series of tweets hit out at the PAGD, calling the conglomerate of mainstream parties opposed to the revocation of Article 370 as ‘Gupkar Gang’.

He said the alliance is insulting the national flag and batting for foreign intervention in J&K.

“Jammu and Kashmir has been, is and will always remain an integral part of India. Indian people will no longer tolerate an unholy ‘global gathbandhan’ against our national interest. Either the Gupkar Gang swims along with the national mood, or else the people will sink it,” he said.

“Congress and the Gupkar Gang want to take J&K back to the era of terror and turmoil. They want to take away rights of Dalits, women and tribals that we have ensured by removing Article 370. This is why they are being rejected by the people everywhere,” Shah tweeted.

Questioning the Congress, he asked whether Sonia Gandhi and Rahul Gandhi support the moves of the PAGD.

“The Gupkar Gang is going global! They want foreign forces to intervene in Jammu and Kashmir. The Gupkar Gang also insults India’s Tricolour. Do Sonia Ji and Rahul Ji support such moves of the Gupkar Gang? They should make their stand crystal clear to the people of India,” he said.