BJP prepares to counter Priyanka’s foray in UP

Leaders, who are connected to farmers, will be entrusted the responsibility of these meetings which will also be held in canal and eastern Uttar Pradesh. 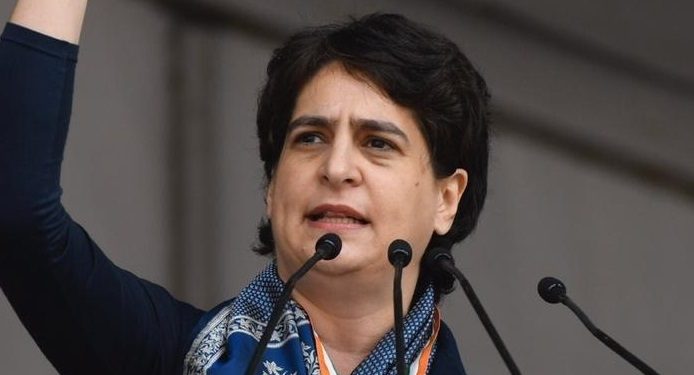 377
VIEWS
Share on WhatsappShare on FacebookShare on TwitterShare on Telegram

Lucknow,(Aryavarth) The Bhartiya Janata Party (BJP) is planning a series of pro-farmer meetings in rural areas of Uttar Pradesh to clear the misconceptions regarding the farm laws among farmers.

Leaders, who are connected to farmers, will be entrusted the responsibility of these meetings which will also be held in canal and eastern Uttar Pradesh.

This will be the BJP’s way of countering Congress General Secretary Priyanka Gandhi Vadra’s foray into the farmers’ agitation through her Kisan Panchayats in western Uttar Pradesh.

The BJP leaders can see a pattern in Priyanka’s visits which are a combination of a pro-farmer approach and a touch of “soft Hindutva” through her temple visits.

In the past two weeks, the Congress general secretary has visited the state thrice.

On February 4, she visited the family of a farmer from Rampur who died during the ongoing stir against the farm laws.

In Saharanpur, she attended a kisan panchayat on February 10 and offered prayers at the Shakumbari Devi temple.

The next day, she took a holy dip in the Sangam during Mauni Amavasya in Prayagraj.

On Monday, she addressed another Kisan Panchayat in Bijnor.

“We have to counter the anti-BJP mood that is being deliberately built up among farmers by the opposition. We are asking our cadres to collect information on all assembly seats, including the 84 seats that the BJP lost in the 2017 UP polls when it returned to power in the state after a long gap,” said a party functionary.

Cadres have also been asked to ascertain the extent of damage, if any, that has been done on farmers’ issue.

UP BJP chief Swatantra Dev Singh has been leading the party’s rural connect activity, one that comes just ahead of the panchayat polls, likely in April-May.

Immediately after the panchayat elections, the stage will be set for the 2022 UP assembly polls and the BJP is working on regaining the confidence of the farmers by approaching them in small groups in western UP.

The BJP is equally focusing on eastern and central UP even though the participation of farmers from this region in the ongoing agitation is minimal.

The BJP, apparently, wants to nip in bud the possibility of the agitation spreading across UP.

However, the main concern is the increased participation of the Congress in the farmers’ agitation.

“There is no doubt that, at present, the Rashtriya Lok Dal is gaining because of the farmers’ agitation. But the situation will change when elections are held next year. The RLD alliance with Samajwadi Party continues and if they stay together, people will recall the Muzaffarnagar riots when Akhilesh Yadav was in power. The Congress is nowhere in the picture and the party does not have the infrastructure needed to convert crowds into votes,” said a BJP MLA from western UP.