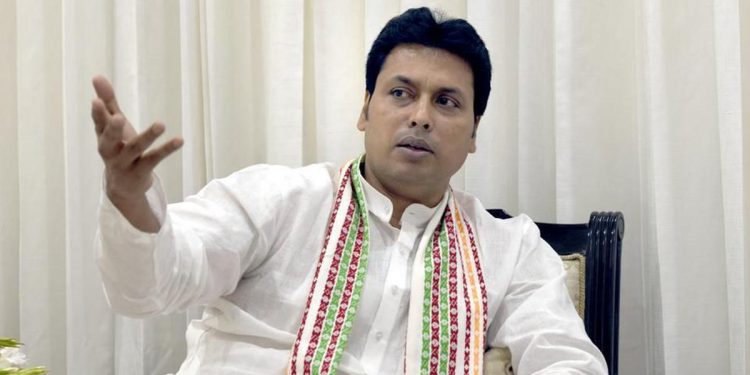 Agartala (Aryavarth): The Schism within the ruling BJP in Tripura has come to the fore with 12 dissident MLAs camping in New Delhi to meet the party’s national president J P Nadda and express concern about “bad governance” in the state, which could lead to its downfall in the 2023 Assembly elections.

“Twenty-five of the 36 BJP MLAs now want a change, and a proper reshuffling in the council of ministers headed by Biplab Kumar Deb so that good governance could be delivered to people,” a member of the team said on condition of anonymity.

He also alleged that “poor leadership and misrule” by Deb have ruined the party in the state, which is now “alienated from people, but lost ground could be restored with the delivery of good governance”.

Sushanta Choudhury, former youth Congress president, who had joined the BJP before the last Assembly elections held in February 2018, told reporters here over the phone that they are hopeful to meet BJP’s national president JP Nadda and other organisational leaders to discuss on the current situation.

He also said they have a plan to seek appointments with Prime Minister Narendra Modi and Home Minister Amit Shah.

“Neither the government nor the party is moving in the right direction. All the pre-poll promises, mentioned in the party’s Vision Document, were made to be fulfilled. These should be reflected in action, but we are far away from reality. We want to highlight what is happening in the state,” Choudhury said.

Asked whether they will demand the removal of Deb from the chief minister’s post, he said, “We will apprise the central leadership of what is happening in Tripura. They would decide if they want to intervene in the issue. Our fight is not against the BJP’s ideology. We have full faith in the dynamic leadership of the prime minister and the home minister.”

After the BJP-IPFT came to power in the state, Roy Barman became the health minister, but he was removed from his ministerial position in June last year, and Deb kept the portfolio with him.

Roy Barman had openly criticised the health department for “mismanagement” at the G B Pant Hospital, a state-run facility for treatment of coronavirus patients.

He was booked in an FIR for allegedly paying “an unauthorised visit” to a COVID Care Centre here.

In the 60-seated Tripura Assembly, BJP has 36 legislators along with eight MLAs from its partner the Indigenous People’s Front of Tripura (IPFT). The CPI(M) has 16.

State BJP president Dr Manik Saha, in an interview with a local TV channel on Saturday, said that he was not aware of the fact that some MLAs had been in Delhi.

He also said actions would be initiated against them if they breach the party’s discipline.