Guwahati (Aryavarth) Assam’s Congress leader and Lok Sabha MP Gaurav Gogoi on Sunday said that in terms of economy, Bangladesh is better than India as the BJP government’s misgovernance has failed to deliver the goods in each front.

Reacting to Prime Minister Narendra Modi’s visit and address to a public gathering in Assam on Sunday, Gogoi told the media that the Northeast Industrial Policy undertaken by the Congress-led previous UPA (United Progressive Alliance) government has been scrapped by the BJP government led by Modi.

The Congress leader said that during the BJP governance in Assam, various corrupt syndicates are proactive in all sectors — industrial to education to welfare schemes.

He said people whoever raised any petty issues or criticise the government they are being harassed by various central agencies causing shrinking of democratic space in the country.

“People are even not being allowed in making comments on social media.”Congress’s Deputy leader in the Lok Sabha said that due to the various agitations, including the protest against the Citizenship (Amendment) Act and the ongoing farmers’ stir, had claimed the lives of many people, but the Modi government is “not in a mood to listen to anyone’s legitimate demand”.

“In Assam, the Prime Minister’s Sunday speech in the public gathering was silent on many issues of Assam including the chronic flood problem. He just came for a few hours to befool the Assamese,” said the Congress MP from Kaliabor parliamentary constituency.

He also criticised the BJP government at the Centre for promising tea garden workers of solving their problem, but not done anything even granting the Scheduled Tribe (ST) status to the community and providing minimum daily wage of Rs 351 remained unfulfilled.

The Prime Minister on Sunday addressed a public gathering at Dhekiajuli in northern Assam’s Sonitpur district and laid foundation stone of two medical colleges at Biswanath and Charaideo besides formally launched the ‘Asom Mala’ scheme to upgrade 2,500 km state highways at a cost of Rs 5,000 crore in 15 years 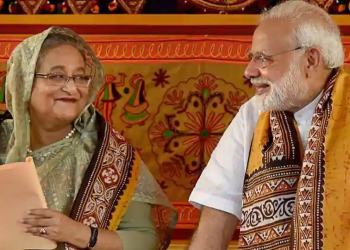