New Delhi, (Aryavarth) On the second day of the Budget Session of Parliament, 27 Bills passed during the fourth session of seventeenth Lok Sabha will be tabled in the Lower House on Tuesday along with various Standing Committee reports that include steps taken by the Union Ministry of Home Affairs during Covid-19 pandemic.

Soon after the House will assemble at 4 p.m., Lok Sabha Secretary General Utpal Kumar Singh will table these 27 Bills that were assented to by President Ram Nath Kovind after these were passed in the previous session of Parliament.

Congress leader of the House Adhir Ranjan Chowdhury and BJP MP Satya Pal Singh will later present the reports of the Public Accounts Committee that includes 21st report on the ‘Implementation of Food Safety and Standards Act, 2006’; 22nd report on the action taken by the government on the recommendations of the committee contained in their 110th report (16 Lok Sabha) on Examination of Accounts of ICAR, ‘Non Achievement of Stated Objective’ and ‘Blocking or Funds or Coconut Development Board’.

The leaders will also present the 23rd Report on action taken by the government on the recommendations of the committee contained in their 114th report (16 Lok Sabha) on ‘Design, Development, Manufacture and Induction of Light Combat Aircraft’.

Besides, reports of the Standing Committee on Coal and Steel, Home will be presented in the Lower House. These reports were virtually presented through video conferencing to the Rajya sabha Chairman M. Venkaiah Naidu on December 21 last year and were forwarded to Lok Sabha speaker Om Birla on the same day.

Reports of the Standing Committee on Health and Family Welfare will also be laid on the table. The reports were presented to the Rajya Sabha Chairman on November 21 last year and forwarded to the Lok Sabha on November 25.

Parliamentary Affairs Minister Pralhad Joshi and Congress leader Adhir Ranjan Chowdhury will move a motion so that the House does agree with the Eighteenth Report of the Business Advisory Committee presented to the House on Monday. 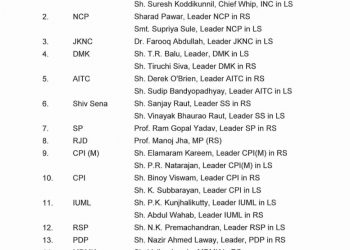