The 30-year-old braveheart, youngest among his two brothers and two sisters, joined the Central Reserve Police Force (CRPF) five years ago after completing his graduation from the Dharmanagar government college. 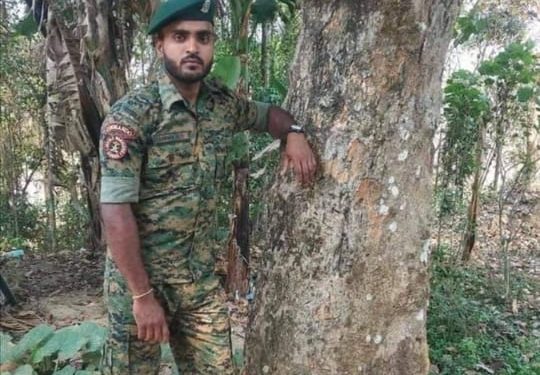 Agartala,(Aryavarth) Tripura’s Sambhu Roy, one of the 22 security personnel martyred in Sunday’s Maoist attack in Chhattisgarh, was the lone breadwinner of his family and last met his parents less than two weeks ago.

The 30-year-old braveheart, youngest among his two brothers and two sisters, joined the Central Reserve Police Force (CRPF) five years ago after completing his graduation from the Dharmanagar government college.

Roy’s father Dipak Roy is a painter who was struggling to manage two square meals for his six-member family before Sambhu got the CRPF job. The grief-stricken family and the neighbours plunged into deep shock after they first learnt about the sad news through various social media platforms late on Sunday evening.

“On Monday we were informed that Sambhu was killed in the Maoist attack in Chhattisgarh and his body would be brought to our home in Bhagyapur village on Tuesday. We are saddened as we have lost everything. We do not know what to do now. He was our everything,” the martyr’s eldest brother Debashish Roy told IANS.

“Sambhu was home just twelve days ago. We were planning to arrange his marriage next year. Now all our hopes are lost,” he said.

A pall of gloom descended on Bhagyapur village after the news of Sambhu’s death first spread through various social media platforms late on Sunday evening.

“After completing his graduation in 2012, Sambhu was frantically searching for a job to help his poverty-stricken family. He was good in various sports and performed well in the NCC (National Cadet Corps). Sambhu was polite and respectful to the elders,” said Chandan Sarkar, Sambhu’s neighbour.

Tripura Chief Minister Biplab Kumar Deb took to social media and said that the nation salutes the supreme sacrifice of the bravehearts who were martyred while fighting the Maoists in Chhattisgarh.

“Tripura salutes the immortal courage and sacrifice of the son of its soil, Shri Shambhu Roy ji who was martyred while fighting the Maoists in Chhattisgarh. 37 lakh people of Tripura stand fully in support with the family of Shri Shambhu Roy ji in this hour of grief1,” Deb said in one of his tweets.

Many important personalities and politicians cutting across party lines visited the martyr’s family and expressed their deep shock and anguish. Shambhu is the fifth para-military force personnel from the northeast region and second from Tripura to be martyred in terrorist attacks in Jammu and Kashmir and Chhattisgarh during the past five months.

On December 23 last year, CRPF jawan Mrityunjoy Chetia from Sissiborgaon village in Assam’s Dhemaji district was martyred in a grenade attack by militants in Jammu and Kashmir.

On December 1, Border Security Force (BSF) sub-inspector Paotinsat Guite from Kangpokpi district in Manipur was martyred in unprovoked ceasefire violation by Pakistan along the Line of Control (LoC) in Jammu and Kashmir.

On November 13, Indian Army havildar Hardhan Chandra Roy from Dhubri district in Assam was martyred in unprovoked ceasefire violation by Pakistan along the LoC in J&K.

On November 8, BSF constable Sudip Kumar Sarkar from Tripura was killed in a terrorist attack in Machil sector in Kashmir’s Kupwara district.