Speaking at the combined graduation parade at the Air Force Academy in Dundigal, Hyderabad, Air Chief Marshal Bhadauria said: "Rapid infusion of niche technology and combat power in every facet of our operations has never been as intense as it is now." 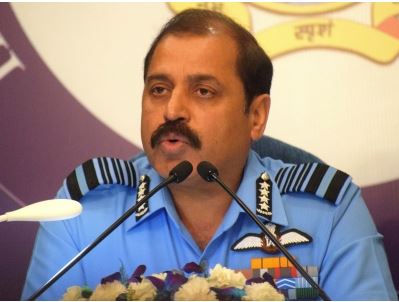 253
VIEWS
Share on WhatsappShare on FacebookShare on TwitterShare on Telegram

New Delhi,(Aryavarth) The Indian Air Force has gone through monumental transformation with unprecedented and rapidly evolving security scenario in the neighbourhood, said Air Chief Marshal R.K.S. Bhadauria, on Saturday, pointing out that this has led to intense combat power in operations.

Speaking at the combined graduation parade at the Air Force Academy in Dundigal, Hyderabad, Air Chief Marshal Bhadauria said: “Rapid infusion of niche technology and combat power in every facet of our operations has never been as intense as it is now.”

He added that it is primarily because of the unprecedented and rapidly evolving security challenges that “we face, coupled with arising geo-political uncertainty in our neighbourhood and beyond”.

Indian military has for long flagged the threat of two front war. With the disputed border with China and Pakistan active at the same point of time, the armed forces are stretched to the maximum.

He said the last few decades have clearly established the critical role of Air Power in achieving victory in any conflict. “It is in this backdrop that IAF’s on-going capability enhancement assumes tremendous significance.”

Bhadauria also referred to how the Air Force maintained operational readiness, proactively assisting in the national fight against the Covid-19 pandemic. Proactive vaccination and strict Covid discipline within IAF enabled us to undertake all Covid tasks on a war-footing, he said.

“IAF’s heavy lift capability was put into action for airlift of crucial Covid related equipment; wherein our transport fleet flew more than 3,800 hours within two months in a huge effort across the globe and domestically to transport critical oxygen Tankers, and all related medical equipment and supplies. You all are joining the field that operates at this level, across the spectrum,” he said to those passing out of the academy.

“It is also essential for all of you to bear in mind that as future leaders, you will stand shoulder to shoulder with your comrades in Olive Greens and Whites and prosecute integrated operations,” Indian Air Force Chief said.

He also said, “You will be an integral part of this important transition in the years ahead,” was the chief’s concluding message to the future leaders.