"Sanatan Dharma and classical Hinduism known to sages and saints was being pushed aside by robust version of Hindutva, by all standards a political version similar to the jihadist Islam groups like ISIS and Boko Haram of recent years" - Salman Khurshid' 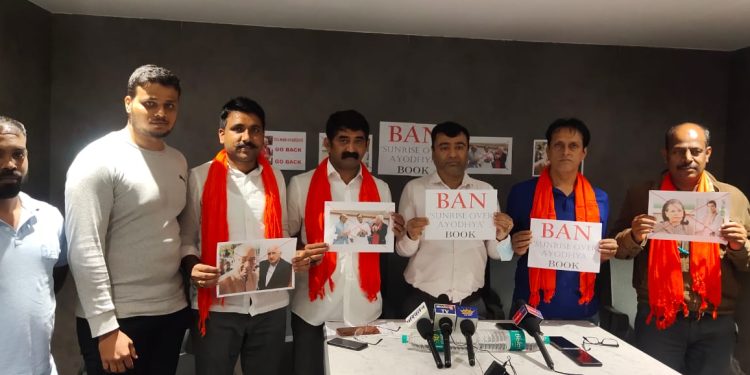 Bangalore (aryavarth) Congress party member Salman Khurshid’s new book on Ayodhya drew widespread criticism across the country. On Thursday he compared ‘Hindutva’ with ISIS and Boko Haram, citizens across India lashed out at the former union minister for doing”politics of appeasement” and defaming Hindus globally.

In the press conference, the leaders promptly demanded a ban on the new book of Salman Khurshid that portrays Hinduism as terror faith, on the lines of ISIS. Dr Goenka, said that when Salman Rushdie released Satanic Verses, it was prohibited by the Rajiv Gandhi government, as it hurt the prevailing sentiments of our Muslim brothers.

On the similar lines, Khurshid’s controversial book has hurt the noble sentiment of crores of Hindus, it should be banned and legal action should be promptly initiated against him, as he has tried disrupting the communal harmony of India.

Famous VHP leader Shashi Kant Sharma asked the BJP govt to file treason case against Khurshid for painting peace loving Hindus as terrorists, by comparing them to ISIS and Boko Haram. He also reminded Digvijay Singh about his stinging defeat by over 450,000 votes by Sadhvi Pragya, he should look at the sentiments of Hindus and interpret the mood of public in India.

RSS worker Anil Kumar forcibly expressed terrible anguish at the new conspiracy to defame Hindus globally, especially when the world is looking to the leadership of India and willingly acknowledges the role of Hindus in shaping global peace and prosperity.

A Delhi-based lawyer Vineet Jindal on Thursday filed a complaint with the police against Congress leader Salman Khurshid for the disparaging remarks in his book “Sunrise over Ayodhya” on Hindutva.

In his complaint, Jindal contended that the senior Congress leader and former law minister Salman Khurshid’s recently released book “Sunrise over Ayodhya: Nationhood in our times” has compared Hindutva to radical jihadist groups like the ISIS and Boko Haram.

In his book titled “Sunrise Over Ayodhya: Nationhood in Our Times”, Khurshid, in a chapter titled ‘The Saffron Sky’, said,”Sanatan Dharma and classical Hinduism known to sages and saints was being pushed aside by robust version of Hindutva, by all standards a political version similar to the jihadist Islam groups like ISIS and Boko Haram of recent years.”

A photograph of the passage was shared by BJP’s Amit Malviya, who said it was aimed at getting Muslim votes.

“Congress’ Salman Khurshid in his new book writes that Hindutva is similar to the jihadist Islamist groups like ISIS and Boko Haram. What else can we expect from someone whose party coined the term Saffron terror just to draw equivalence with Islamic jihad, to get Muslim votes?” Malviya, who heads the IT wing of BJP, said in a tweet.

In his police complaint, Vineet Jindal alleged that it is not only instigating and provoking statement but also stirring enraged emotions among the Hindu religion followers.

“Our constitution provides every citizen with the freedom of speech and expression but the misuse of this right is inexplicable when it threatens the honour and harmony of the country and provokes its citizens based on community and religion and threatens the security of the nation then it is considered as a grave offence,” the petition read

The contents of the statement made by the accused claim Hinduism to be equivalent to ISIS and Boko haram, which are terrorist groups. It is quite an aggravating and defamatory statement for the whole Hindu community and also questions their values and virtues about a society, Jindal alleged.

The equivalence of Hinduism to ISIS and Boko haram is perceived as a negative ideology that Hindus have been following and Hinduism is violent, inhuman and oppressive.

This statement indicates his intent of waging war and activating enmity between the different groups on the grounds of religion which is against the ideology of a secular democratic country like ours and also a criminal offence as per the law of the land.

Being a member of Parliament and former Law Minister of India, the accused is a public figure, having a larger influence on the public, the statement is agitating the Hindu community and also threatens the security, peace and harmony of our nation and disrupts public order.

The lawyer demanded an FIR against Khurshid under 153,153A ,298 and 505 (2) of I.P.C which are cognizable offences and very serious and to take strict Legal Action.

“Salman Khurshid must’ve published the book to purposely create a controversy. They support politics of appeasement. Congress leaders and Gandhi family are supporters of ‘Tukde-Tukde’ gang. They want country to be divided on the basis of castes,” he said.

“The things that were said during the release of Khurshid’s new book not only hurt the sentiments of Hindus but also deeply hurt the soul of India,” said the BJP spokesperson.

“Why is it not Soniaji, such leaders should be immediately sacked from Congress? This sends a message in politics that you can be our opponent, but you cannot be the enemy of the country,” he said.

Khurshid’s book was released in Delhi on Wednesday, and was attended by former union ministers P Chidambaram and Digvijay Singh.

Chidambaram, at the book launch, remarked that after Supreme Court judgment on the Ram Janmabhoomi – Babri Masjid dispute, things took a predictable course. “Within a year or so everyone who was accused was acquitted. So like no one killed Jessica, nobody demolished Babri Masjid,” Chidambaram said.