Rajasthan Police on Thursday removed DSP Sandeep Saraswat from his position after a purported video of him suggesting history-sheeter Syed Salman Chishti an escape route after his arrest surfaced. In the video doing rounds, the DSP suggests that Chisti say that he announced his house and property as a reward for the beheading of Nupur Sharma under the influence of alcohol. 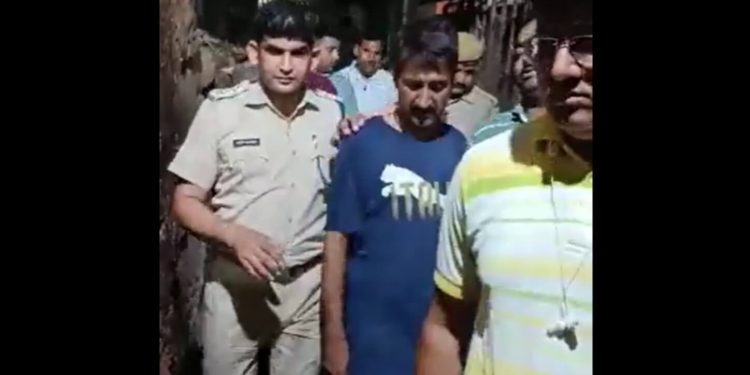 Jaipur, Rajasthan (Aryavarth) — Acting Director-General of Police Umesh Mishra said that Saraswat had been announced APO (Awaited posting order) by the Police Headquarters and the investigation had been handed over to the Vigilance Branch.

Since Wednesday night, a video has been going viral in which Salman Chishti, arrested on Tuesday night for announcing the house/property for the beheading of Nupur Sharma, was being suggested to say that he made the controversial statement in an inebriated state.

As the video went viral, netizens were seen questioning the alleged appeasement policy of the Rajasthan government. Police then took action in the matter.

Mishra informed that action is being taken against the criminals as per rules. Intense prosecution action will be taken against the accused in the case by collecting strong evidence. Meanwhile, the Additional Superintendent of Police, City Vikas Sangwan, said that the accused is a druggie. He had tried to harm himself while being arrested. Keeping this in mind, he was deliberately being lured and taken into custody to prevent the situation from deteriorating. He added that the accused was produced in the court and taken on remand, and interrogation is on.

Salman Chishti was arrested late Tuesday night by Dargah police, and this video surfaced on Wednesday.

In the video, Chishti had announced to give away his house and property as a reward to anyone who decapitates suspended BJP spokesperson Nupur Sharma for her controversial remarks on Prophet Muhammad.

Police officials confirmed that Salman is not a religious leader but a history-sheeter of the Dargah police station and has been a criminal. There are over a dozen cases registered against him for murder, firing, assault and intimidation.

Police said that Salman Chishti is a drug addict and made an objectionable post viral in a state of intoxication. “We are investigating if someone is behind this,” they added.