A two-member team geared up with necessary rescue equipment immediately reached the location to carry out the rescue operation. After ensuring that the police staff were at a safe distance, the rescuers carefully transferred the python to a safe transport carrier. 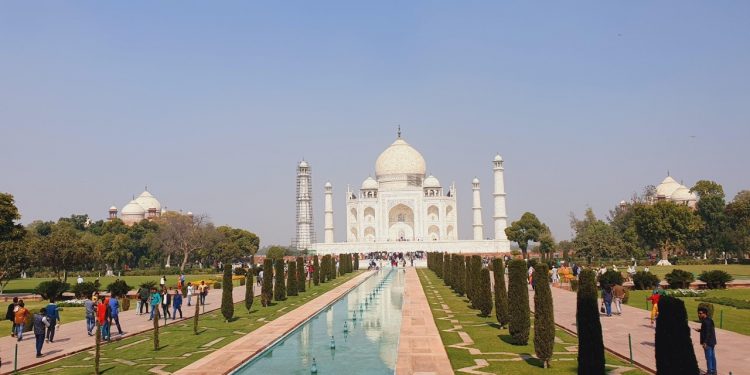 359
VIEWS
Share on WhatsappShare on FacebookShare on TwitterShare on Telegram

Agra, (Aryavarth) Agra wildlife SOS rescued an unexpected tourist from the Taj Mahal premises. A five-foot-long Indian Rock Python was rescued by the Wildlife SOS Rapid Response Unit after it was sighted at the Taj Mahal ticket counter. The snake was kept under observation for a few hours and later released in its natural habitat.

The tourism police officials stationed at the West gate of the historical monument, found a 5-foot-long Indian Rock Python on Tuesday morning at the ticket counter. Taking quick action, they immediately reported the incident to Wildlife SOS on their 24-hour helpline number (+91-9917109666).

A two-member team geared up with necessary rescue equipment immediately reached the location to carry out the rescue operation. After ensuring that the police staff were at a safe distance, the rescuers carefully transferred the python to a safe transport carrier.

Vidhyabhushan Singh, Tourism Police Constable, who called Wildlife SOS, said, “The python was spotted near the ticket counter window by local tourists. Since, the Wildlife SOS team had carried out such rescues from the premises in the past as well we immediately alerted them.”

Kartick Satyanarayan, Co-founder and CEO of Wildlife SOS, said, “We are thankful to the tourism police at the Taj Mahal for their support and for alerting Wildlife SOS to this emergency. Operations involving snakes are highly sensitive. We have trained rescuers who are efficient and employ precautions so as to avoid causing further stress to the animal.”

Baiju Raj M.V, Director Conservation Projects for Wildlife SOS, said, “Over the years, we have rescued several reptiles and birds from the Taj Mahal premises as it is close to the Taj Nature Walk green belt.”

This species is protected under Schedule I of the Wildlife Protection Act, 1972 and listed under Appendix I of the Convention on International Trade in Endangered Species of Wild Flora and Fauna (CITES), which regulates the international trade of wildlife species.