Not to be outdone by his sister, Rahul Gandhi, who is nobody in Congress, led a contagion of chief ministers of Punjab and Chhattisgarh — Charanjit Singh Channi and Bhupesh Baghel for the much awaited photo shoot, without wearing any mask. After all, only in tragedy does Congress get a chance to get high TRP ratings. 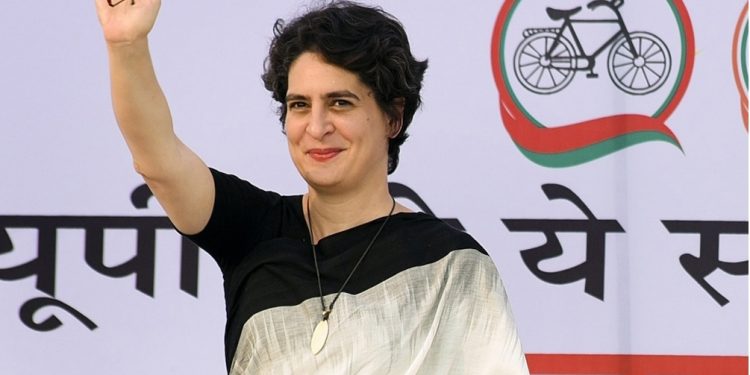 BENGALURU (Aryavarth) : The violence that erupted in the Lakhimpur Kheri on October 3
when a jeep allegedly ran over protesting farmers has given a new political life to the sinking
ship Congress and party general secretary Priyanka Gandhi Vadra, who had nothing to
showcase as the CM candidate in UP against Yogi.

Priyanka Gandhi was being questioned by many for the Punjab fiasco and insulting an army
veteran Amrinder Singh. She was also being questioned for putting a known Pakistan
sympathiser as the state Congress chief.

Congress is known for fomenting religious divide between Hindus and Sikhs, this time again,
the agenda of Congress is very clear, show that the BJP is anti-Sikh. Little they know, that
Sikhs can never forget how inept and incapable, Rajiv Gandhi allowed the genocide of Sikhs
in 1984.

It is such an irony, that both Rahul and Priyanka have refused to apologise for the 1984 Sikh
genocide by Congress leaders, and here they go and meet the family of Lovepreet Singh, one
of the farmers killed on October 3.

When Priyanka was stopped from leaving for Lakhimpur on October 4, she set out of her
house on foot and before the cops on duty could realise what was happening, she got into a
waiting car and sped off towards Lakhimpur disregarding all security protocols.

The administration stopped her at Sitapur, just ahead of Lakhimpur. Priyanka was detained in
a guest house but allowed access to her phone. She used this opportunity to maximum to
give interviews to TV channels, to shoot videos and even to address Congress workers who
had assembled to hear her speak. This seemed like the perfect opportunity for Priyanka to tell
people she exists.

Other political leaders could not get the TRP gain, Akhilesh Yadav was detained in Lucknow.
Congress CM, Bhupesh Baghel staged a dharna at Lucknow airport when he was refused
entry into the state. The deputy chief minister of Punjab was also stopped from going to the
site. These congress CM’s made a mockery of themselves and dampened the glory of CM’s
office.

Many in opposition, saw this as a great opportunity to grill BJP. Anti-Indian and Islamic
terrorist sympathiser, Mehbooba Mufti in Kashmir, came in support of Priyanka Gandhi.

Rightfully, so as Rahul has found that he is Kashmiri pandit, whose Grand-dad was a Parasi.
And Mother is an Italian. Not to be outdone, Rahul Gandhi, who is nobody in Congress lead a contagion of chief ministers of Punjab and Chhattisgarh — Charanjit Singh Channi and Bhupesh Baghel for the much awaited photo shoot, without wearing any mask. After all, only in tragedy does
Congress get a chance to get high TRP ratings.