On Thursday, Karnataka Animal Husbandry Minister Prabhu B Chavan said that he adopted 31 cows in the government and private goshalas, one in each district under the 'Punyakoti Dattu Yojana' (cow adoption) Portal. On Thursday, Karnataka Chief Minister Basavaraj Bommai launched the portal at Home Office Krishna. 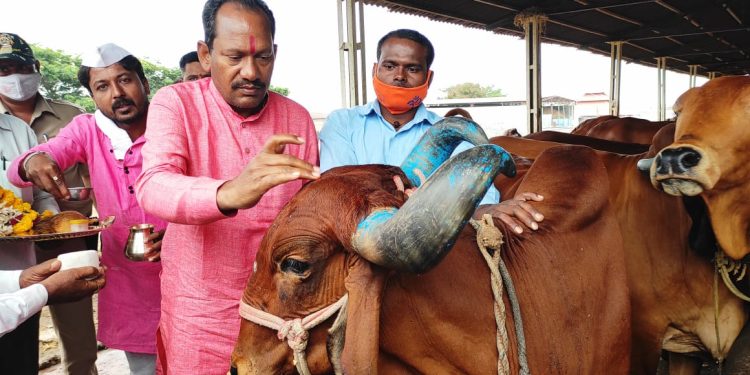 Bengaluru, (Aryavarth) Chavan mentioned providing nutrition and care for the cows as the motive for the adoption.

“Adopting 31 cows on this day and helping them in their nutrition and care is the motive of my past birth virtue. Earlier on my birthday, I adopted cows in Bidar Goshala. Chief Minister Basavaraj Bommai adopted 11 cows at Rashtrothana Goshala on his birthday and set an example for us all,” the Minister said.

“100 cows have been adopted by the public, including me in government and private goshalas. One thousand three hundred fourteen people have donated to goshalas. One hundred twenty-three goshalas are registered on the Punyakoti Dattu Yojana portal across the state, and registration of 60 goshalas is in progress,” the Minister said, adding that 16,650 cattle have been registered.

Chavan informed that with the scheme’s implementation, Karnataka became the first state in the country to come up with any such programme.

“After the enactment of the Prohibition of Cow Slaughter Act, a government cowshed was established in the districts. Karnataka is the first state in the country to implement the Punyakoti Adoption Scheme. He said that the Punyakoti Dattu Yojana had been implemented in the budget for 2022-23,” he said. The scheme aims to make cowsheds financially sound with the public’s cooperation.

“The aged, sick, needy, exhausted, abandoned cattle brought by farmers, male calves and cattle seized by court and police custody will be sheltered and nurtured,” he said.

“Under the Punyakoti Dattu Yojana, cow adoption, a donation to Goshala and cattle feeding schemes are provided for the public to take care of cows in cowsheds. Your media mates should promote this project,” the Minister said. Chavan appealed to the public to adopt cows and participate in conserving the herd.