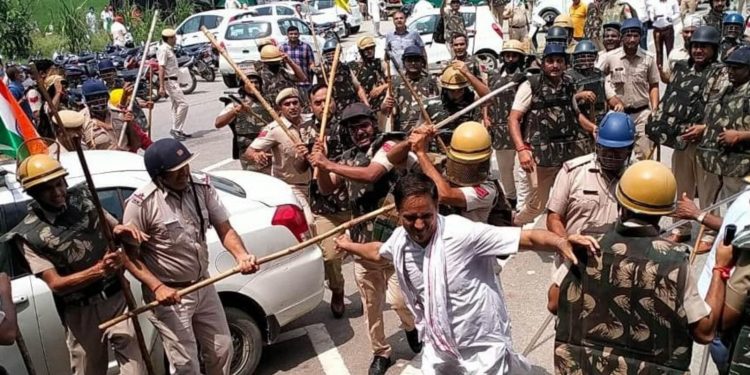 831
VIEWS
Share on WhatsappShare on FacebookShare on TwitterShare on Telegram

“If anybody crosses barricade, make sure he has a broken head “

Bengaluru (Aryavarth) In a video viral on social media, Sinha can be seen standing in front of a group of policemen and instructing them to not allow protesting farmers in Haryana to go beyond a barricade.

The same video was shared by BJP MP Varun Gandhi, it shows him instructing Haryana police personnel to hit protesting farmers on their heads if they tried to cross the barricades.

Ayush Sinha is heard instructing a group of policemen: “Utha utha ke maarna peeche sabko (hit them hard)… We shall not allow this cordon to be breached. We have enough force available. We haven’t slept for the past two days. But you have come here after taking some sleep… Mere paas ek bhi banda nikal ke nahi aana chahiye. Agar aaye toh sar foota hua hona chahiye uska. Clear hai aapko (No one should break the cordon and reach me. If someone does, make sure he has a broken head. Hope this is clear).”

Speaking to ANI after the video went viral, Sinha said that the statement was made to “use force proportionately” in response to the stone pelting by protesting farmers.

Close to 10 people were injured on Saturday after the state police lathi-charged a group of farmers who had stopped traffic on a highway while heading towards Karnal to protest against a BJP meeting, where Chief Minister Manohar Lal Khattar, state BJP chief Om Prakash Dhankar and other senior leaders were present.

Citing media reports and viral videos of the baton charge on the farmers on way to protest against Khattar’s visit to Karnal for a meeting, the Punjab Chief Minister Amarinder Singh also condemned the IAS officer who was reportedly seen giving instructions to the police force to bash up the protesting farmers. He demanded immediate dismissal of the officer and strict action against him, as per the law.

“This is no way to treat out annadaatas,” said Amarinder Singh, warning that the BJP would have to bear the consequences of such horrendous actions, and of the apathy of its government at the Centre towards the farmers, in the forthcoming Assembly elections in Punjab and other states.

Randeep Surjewala compared the Khattar government with General Dyer and said that farmers are treated like Dyer had treated the people in Jallianwala Bagh.