‘I am Kanhaiya Lal, I support Nupur Sharma’ campaign by Ram Sena

the act of breaking of watermelons of a Muslim merchant by Shri Ram Sena activists was projected as an act of bloodshed. Muthalik said. 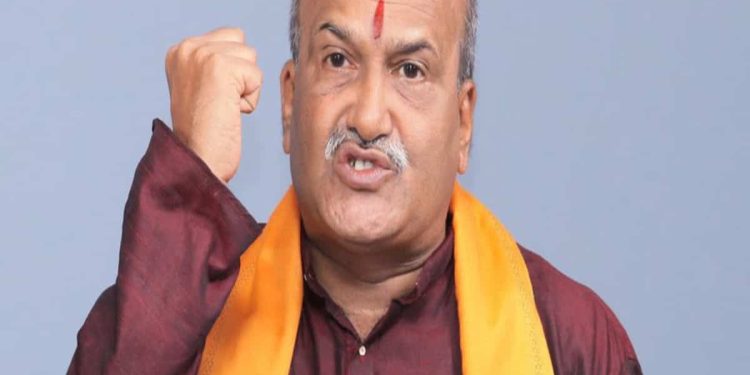 Dharwad, (Aryavarth) —  Shri Ram Sena chief Pramod Muthalik announced the ‘I am Kanhaiya Lal, I support Nupur Sharma’ campaign at the national level condemning the beheading of a tailor in Rajasthan’s Udaipur on Tuesday.

“Where have the intellectuals gone? They used to raise their voice on petty issues. Lakhs of us support expelled BJP leader Nupur Sharma. If you have the courage come here,” he challenged.

Hindu organisations will carry out a campaign throughout the country condemning Kanhaiya Lal’s beheading. “We will show our might,” he said.

“We have faced you (Islamic fundamental and invasive forces) for thousands of years and made you bite the dust. You will also get an answer for this beheading incident,” he stated.

When Muslim merchants were banned from temple premises as per rules, the act of breaking of watermelons of a Muslim merchant by Shri Ram Sena activists was projected as an act of bloodshed. Muthalik said.

Now, this beheading incident has happened. Opposition leader Siddaramaiah should open his mouth now, he demanded. He asked intellectuals to get a fatwa issued against the accused. Stringent Acts such as TADA should be brought back, Muthalik said.