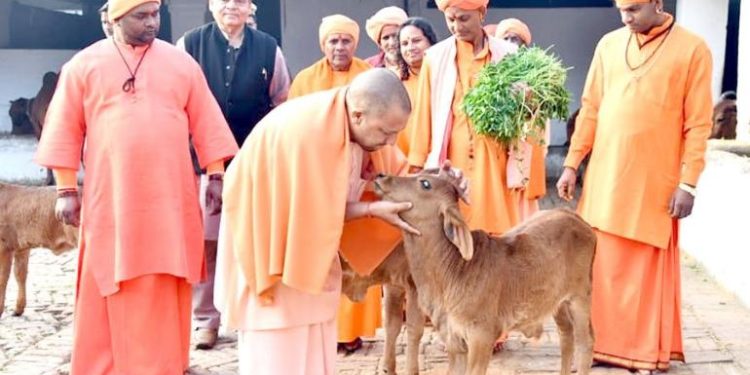 Lucknow, (Aryavarth): India is an agricultural nation, and the Govansh (cow) is the foundation of the Indian economy, Chief Minister Yogi Adityanath said on Saturday. He further stated that Indian farmers used natural agricultural methods to increase soil productivity before developing modern technologies.

When the Industrial Revolution took place in Europe and India moved towards slavery, traditional farming in the country also started to come under attack. From that point on, the defeat began. Even though after independence, the nation became self-sufficient in food grains, it could not escape its negative repercussions,” said Yogi.

The Chief Minister spoke at the State Level Cow Based Natural Farming Workshop-2022 at the Indira Gandhi Pratishthan. The CM said that this programme is an effort to preserve Mother Earth’s natural state and to save ‘India’s faith.’

The CM remarked: “I frequently interact with the public during ‘Janata Darshan’, and I have found that 10 out of every 100 applications we receive are for financial aid for people with critical illnesses. Assistance is being provided to them from the CM Relief Fund, but I’m also interested in learning about the cause of their illnesses. Food is a contributing factor in this. When adults should be contributing to humanity and the world’s well-being, they are afflicted with diseases. This is something to be worried about.”

The Chief Minister proposed two additional measures to prevent illness – save the Indian breed of cows and help conserve and preserve the true potential of the soil by boosting its fertility through cow-based farming.

“This initiative aims to protect both the present and the future. The PM incorporated cow-based natural farming into the union Budget and put it into mission mode. In 2021, PM launched this initiative from Varanasi. The state has also endorsed this programme.”
He added that by establishing 235 clusters in seven districts of Bundelkhand with 47 development blocks and 11,750 hectares of land, the State Government began to provide incentives for cow-based natural farming.

The CM stated that the goal in 2020 was to promote natural farming and cow-based nurseries in areas situated on the banks of the Ganga, expand horticultural crops, and preserve the river’s unceasing flow as its purity.

“The state’s 27 districts that would practice cow-based farming were chosen. The state government has marked 62,200 hectares for such farming while 1244 clusters are being created for this,” Yogi remarked.

The Chief Minister asserted, “We will work towards practising natural farming by the National Mission on Natural Farming. Additionally, the government is promoting it by establishing 470 clusters on 23 510 hectares in 39 development blocks spread over 23 districts, increasing natural farming on about 100,000 hectares.”

Assuring that the government will continue to take on a lot more responsibilities in promoting natural farming, the CM said that there are four State agricultural universities in UP and directives have been issued to boost the setting up of laboratories for natural agriculture certification.

CM Yogi and the Governor of Gujarat felicitated five farmers for their outstanding work in natural farming. These farmers include Mahendra Singh of Azamgarh, Ramesh Arya of Muradabad, Himanshu Gangwar of Farrukhabad, Satya Prakash Misra of Raebareli and Ramakant Tripathi of Fatehpur district.