Lack of rainfall and hot winds blowing from Rajasthan was behind the severe weather condition, India Meteorological Department (IMD) said. 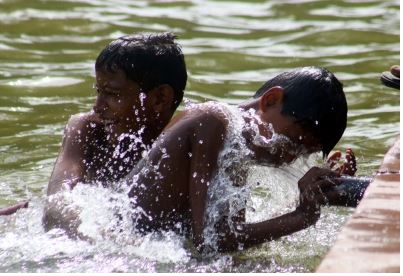 New Delhi,(Aryavarth) ‘Severe heat wave’ condition will continue in the national capital, Haryana and west Rajasthan for the next six-seven days with possibility of the mercury breaching 40 degrees Celsius everyday.

Lack of rainfall and hot winds blowing from Rajasthan was behind the severe weather condition, India Meteorological Department (IMD) said.

On Thursday, the maximum temperature will hover around 42 degrees Celsius in Delhi, the IMD said.

A day after the ‘severe heat wave’ gripped the city with mercury rising to 43.5 degrees Celsius, seven notches above the normal and the highest this year, the IMD said the minimum temperature registered on Thursday morning at 31.7 degrees was also four notches above normal.

The weather office also predicted partly cloudy sky with possibility of thunder development and heat wave conditions at isolated places in the city.

Similar weather condition was reported on Tuesday too.

It is expected that there will be some respite on Friday in the form of dust storm or thunderstorm, the IMD said.

Prevailing meteorological conditions, large scale atmospheric features and the forecast wind pattern by dynamical models suggest that no favourable conditions are likely to develop for further advance of southwest monsoon into remaining parts of Delhi, Rajasthan, west Uttar Pradesh, Haryana, Chandigarh and Punjab during the next one week, said the National Weather Forecasting Centre of IMD.

Subdued rainfall activity is very likely to continue to prevail over Northwest, Central and Western parts of Peninsular India during next 6-7 days. “Isolated or scattered thunderstorm activity accompanied with lightning and rainfall is also likely over these regions during this period.”

Under the influence of strong moist southwesterly winds at lower tropospheric levels from Bay of Bengal to northeast and adjoining east India, there is possibility of fairly widespread rainfall with isolated heavy rainfall over Bihar, West Bengal, Sikkim and Northeastern states during next 6-7 days.

Due to strengthening of moist easterly winds along the northern Uttar Pradesh and Uttarakhand from Thursday, there is possibility of enhanced rainfall activity with isolated heavy falls over East Uttar Pradesh during next five days.