Europeans are struggling to buy daily food items: Sinking like the Titanic

Charlotte Clemens, a college student in Berlin, Germany, has to calculate every penny carefully. She has to live as thriftily as possible, a scenario she didn't anticipate a few months ago. This thrifty move isn't due to bankruptcy or fiscal malfeasance but because of soaring inflation in the cost of living as a chain reaction to Germany's decision to ease reliance on Russian energy and its devotion to NATO, among many others. 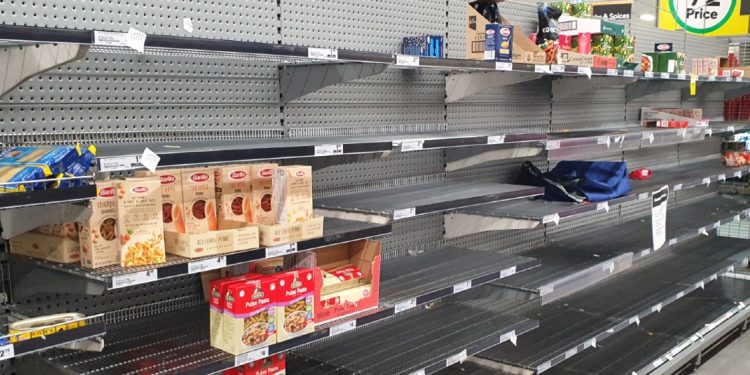 Bengaluru (Aryavarth) – Less than 400 kilometres away in the Netherlands, Sonja van den Ende, a Dutch investigative journalist, has not only found the price points on supermarket commodities to be far higher than before but also the buying of some necessities like sunflower oil has become more challenging.

“Sunflower oil is a rarity, and a litre easily costs 3 to 4 euros if it is in stock. If it is not in stock, there is a sign that reads: ‘Remember all the Ukrainians affected by war,'” van den Ende told the Global Times.

“During the crisis, money was thrown as an EU propaganda tool. Few Europeans actually received help, and when they received money, it was mostly in the form of a loan,” she said.

According to her, one of her acquaintances had to sell his house to cover the soaring cost of living. The man now rents a caravan at a holiday camp where he lives.

Their stories are the new norm in the West. A Reuters report on June 17 said that Eurozone inflation rose to a record high of 8.1 per cent last month in line with a preliminary estimate, more than four times the European Central Bank’s target. It pointed out that inflation has now become “increasingly broad, affecting everything from food and services to everyday goods.”

An article by the Brookings Institute showed that low- and middle-income households tend to be more vulnerable to high inflation.

Unable to bear an increasingly high-pressure life, many Europeans took to the streets in protest, with at least some criticising the government for allocating too many resources to NATO and Ukraine.

On June 20, around 70,000 Belgian workers protested against inflation and the rising cost of living in Brussels. Belgian inflation hit a record 9 per cent in June, Reuters reported. According to a Euronews report, a “small number of placards and banners on the day of action did criticise Belgium for enforcing EU sanctions against Russia.”

Iran state television Press TV reported that at the Brussels’ cost-of-living protest, some on strike insist there is too much emphasis on war and not enough on diplomatic negotiations.

In the video clip Press TV uploaded on Twitter on June 21, some interviewees expressed their frustrations regarding rising inflation when wages have continued to stay the same. One woman said it’s cheaper to stay home than go to work. A middle-aged man complained to the Press TV that “they have money to send to Ukraine for sophisticated weapons which costs a lot, but they say they don’t have enough money to support us.”

Another pointed out that NATO’s 2 per cent rule is entirely useless.

In 2006, NATO Defence Ministers agreed to commit a minimum of 2% of their GDP to defence spending.

On Friday, Ryanair staff in Belgium went on strike, joining industrial action elsewhere in Europe, according to Reuters. The report said that “surging inflation across the continent has led to millions of workers struggling with rising living costs, prompting trade unions to demand higher wage increases, often backed by strike calls.”

Analysts pointed out that the current economic recession and high inflation in Europe are a result of a series of factors, including sanctions on Russian energy, devoting too many resources to NATO, and loose monetary policies adopted amid the global pandemic.

Less than a month after Clemens moved into her new apartment rental in April, she was informed of a rent increase by her landlord because “natural gas prices are higher than expected.”

“Although prices in Germany have previously seen an increase, this time the price increase was like a huge wave that hit me on all fronts,” Clemens told the Global Times.

Clemens said her rent has increased from 778 to 825 euros per month, but that’s not the last straw. Cooking oil increased from 1.2 to 1.7 euros at the beginning of February and later to two euros, culminating in a massive supply deficit. In April, only Russian and Turkish supermarkets had a small supply of oil at 4.99 euros, Clemens said.

“Instead of buying things randomly, I am now in the habit of making shopping lists and buying only necessities because I don’t know how much longer the economic turmoil caused by the Russia-Ukraine conflict will last,” she said.

Gasoline prices are soaring due to sanctions on Russian energy. With a 20 per cent increase in gasoline prices, Clemens said she didn’t hesitate to carpool with her colleagues.

While the Berlin government claims it plans to introduce a ticket this summer that would allow residents access to all public transportation in the country for 9 euros a month, Clemens said she prefers not to use public transport at the moment.

“As a transit point for many refugees, there is currently a peaceful atmosphere in Berlin between the locals and the Ukrainians. There are so many negative voices and comments against refugees on the internet. Conflicts can happen anywhere,” Clemens said.

Van den Ende told the Global Times that before the Russia-Ukraine conflict, EU citizens could buy cheap chicken and eggs from Ukraine. The Dutch poultry company in Ukraine is now bankrupt, partly due to the competition.

Van den Ende made three trips to Ukraine’s eastern Donetsk and Luhansk regions in March, from where she reported for more than a month.

She stressed that the war in Ukraine directly impacted Dutch lives as a whole.

“For example, the Dutch pay an awful lot in energy costs. The gas and electricity bill has currently become unaffordable. Gas prices have risen nearly 100 per cent per month. The average Dutch person with a family of two children spends about 300 euros per month on gas alone. On top of that comes water and electricity. Then you quickly come to 500 to 600 euros per month,” she said.

At the end of May, the EU decided to ban 90 per cent of all oil imports from Russia by the end of the year, part of a more comprehensive array of sanctions, further escalating already exorbitant energy prices. According to the Business Standard, the move also exposed political rifts within the 27-nation bloc, and one such example is the exemption made for energy-poor Hungary.

“All my Dutch friends and I think everyone except the rich has been affected by this massive price hike and housing crisis. One of my acquaintances had to sell his house because of the high cost of living. Now he has rented a caravan at a holiday camp. This holiday camp has become very busy in the last year, and there is even a waiting period, not for vacation but to have shelter,” van den Ende said.

However, she said that the Dutch government and other European authorities had not made any positive adjustments to extend further assistance to the people.

“So why would some Europeans still believe in the political elite? They arrive at summits in expensive cars and on planes, they preach the climate ideology to their populations as only cultists would, but they don’t care much about it,” she said.

The European Council on Foreign Relations (ECFR) surveyed the Russia-Ukraine conflict among approximately 8,000 people between April 28 to May 11. The research showed that there is a split when it comes to long-term goals. They are “divided between the ‘Peace’ camp (35 per cent of people) that wants the war to end as soon as possible, and a ‘Justice’ camp that believes punishing Russia (25 per cent of people) is a more pressing goal,” according to the ECFR.

“In all countries, apart from Poland, the ‘Peace’ camp is larger than the ‘Justice’ camp. European citizens worry about the cost of economic sanctions and the threat of nuclear escalation. Unless something dramatically changes, they will oppose a long and protracted war. Only in Poland, Germany, Sweden, and Finland is there substantial public support for boosting military spending,” according to the ECFR.

Claudio Salvatore in Italy told the Global Times that Democrats in Europe are “leading us to an economic and military confrontation with the Eurasian countries. Through the ever-expanding NATO, they wage wars in every country to take control. They call it freedom and democracy, but it’s another form of imperialism.”

Xu Poling, a researcher at the Chinese Academy of Social Sciences, told the Global Times that Europe is divided.

Inside the EU, there is also inconsistency in demands among member countries. Every country’s dependence on Russian energy is different, and every country’s attitude toward Russia is also different, he said.

At its core, the division is between the ordinary people in Europe and Europe’s elite class. “It is Europe’s political elites who currently dominate sanctions against Russia,” he stressed.

According to Xu, new EU countries, such as Poland, Lithuania, and the Czech Republic, which have historical grievances with Russia, are much more active in imposing sanctions on Russia, even at their own expense. In contrast, traditional European countries have been less aggressive.

Xu said that the European elites had noticed the struggle that ordinary European citizens were now experiencing, but they were unwilling to make changes. It is still too early for them to do so in their political interests. “All that needs to be done now is to blame Russia for everything and Putin for everything.”

He noted that the spirit of European sanctions against Russia comes from the US.

“Regarding sanctions against Russia, European and US elites have come together. In essence, the US did not consider the issue from the standpoint of the practical interests of Europe. Still, the European sanctions against Russia reflected the implementation of the US spirit in Europe. This can also be interpreted as a move to compete for global leadership,” he said.

But the source of the inflation in Europe is the US. “The source of European inflation is related to the emotional release of currency after the pandemic, especially by the US. The flood of dollars has pushed global commodity prices, and the Russia-Ukraine conflict has only made the problem more visible,” Xu said.

Even though it is still a hot summer day, Clemens’ heart is far from warm as she contemplates worriedly about winter heating.

“Europeans are slowly waking up and seeing their riches go up in smoke, their standard of living is going back by leaps and bounds, and they have not yet reached the Middle Ages. Europe is like the sinking Titanic, but hopefully, many Europeans can jump to safety,” van den Ende said.