Delhi’s minimum temperature to dip to 11 degrees this week: IMD

The AQI at a few monitoring stations in the city remained in the 'severe' category (between 401 and 500) on Thursday morning, while others recorded an AQI of 'very poor' (between 301 and 400). 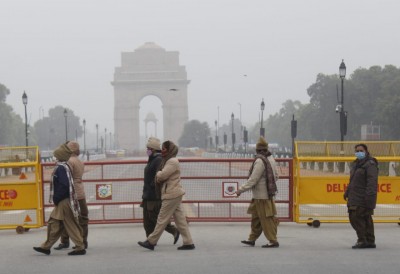 New Delhi, (Aryavarth) The minimum temperature in the national capital this week will drop to 11 degrees Celsius, the India Meteorological Department (IMD) said in its latest update on Thursday.
With a minimum temperature of 13 degrees Celsius, Delhi woke up to a misty Thursday morning with an Air Quality Index (AQI) of 360 under the ‘very poor’ category.
The maximum temperature for the day will settle at 28 degrees Celsius.
This entire week the maximum temperature will fluctuate between 25 to 28 degrees Celsius, the IMD data revealed.
Relative humidity at 8.30 a.m. was recorded at 95 per cent.
The System of Air Quality and Weather Forecasting And Research (SAFAR) recorded the level of PM 2.5 and PM 10 pollutants at 9 a.m. at 69 and 125, respectively.
Meanwhile, the Air Quality Early Warning System forecast for Delhi has indicated the national capital’s AQI could improve gradually after remaining in the ‘very poor’ category from November 10 to 12.
The wind direction continues to be from the northwest direction and conducive for the transport of pollutants from crop residue burning.
The contribution of stubble burning to PM2.5 levels in Delhi is predicted to be around 14 per cent on Wednesday. This is down from a figure of 27 per cent on Tuesday, according to the SAFAR forecasting system.
The AQI at a few monitoring stations in the city remained in the ‘severe’ category (between 401 and 500) on Thursday morning, while others recorded an AQI of ‘very poor’ (between 301 and 400).
Meanwhile, Anand Vihar recorded an AQI of 453, ITO 410, Jawaharlal Nehru Stadium 405, RK Puram 395, Wazirpur 440, according to the Central Pollution Control Board.