Apart from passing of bill, Chief Minister B S Yediyurappa even read out his reply in 40 minute on the Budget discussion, though Congress party members continuously disrupted him by raising slogans. Ruling party legislators even engaged in heated arguments with the Congress members over their conduct. 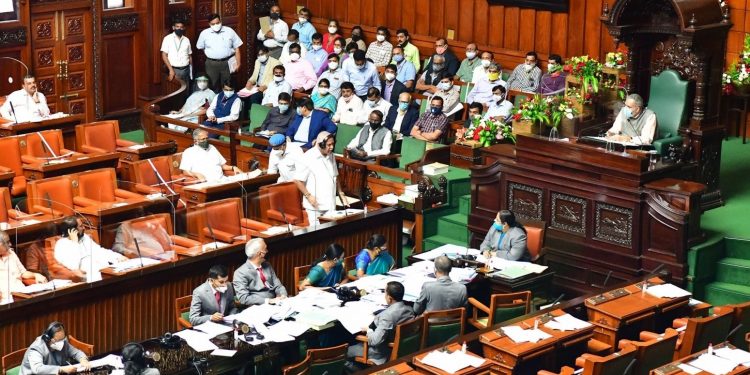 482
VIEWS
Share on WhatsappShare on FacebookShare on TwitterShare on Telegram

Bengaluru(Aryavarth) Amid continued protest by the Congress for the third day in a row, Karnataka ruling the Bharatiya Janata Party (BJP) passed finance related bills in the Assembly sans debate through voice vote.

Apart from passing of bill, Chief Minister B S Yediyurappa even read out his reply in 40 minute on the Budget discussion, though Congress party members continuously disrupted him by raising slogans. Ruling party legislators even engaged in heated arguments with the Congress members over their conduct.

The Congress members continued their protest by raising slogans like ‘Down Down BJP’, ‘Down Down CD government’, while some BJP legislators questioned the grand old party’s morality.

The ruling party members said that people were watching the developments and will teach them a lesson in the days to come.

Calling it ‘anti democratic’ and ‘unconstitutional’, Law and Parliamentary Affairs Minister Basavaraj Bommai said the Congress was unnecessarily disrupting the proceedings and infringing on the rights of the other members who want to participate,

“Your protest is against the law, constitution and democratic principles” he said.

Former speaker and BJP MLA K G Bopaiah objected to the protest and questioned the Opposition as to how the government can ask the Chief Justice to monitor any probe.

“Can the government write such a letter to the Chief Justice. Judicial probe is a different matter,” he argued.

While Industries Minister Jagadish Shettar too said the Congress should be ashamed of their conduct as he questioned their morality by accusing them of hushing up the sex scandal, involving former minister H Y Meti, while in power.

As his repeated requests for cooperation in conducting the business of the House went unheard, Speaker Vishweshwar Hegde Kageri said that he was tabling the answers of the question in the house and requested the Chief Minister to begin his reply on the budget discussion.

At the end of his reply on the budget, Yediyurappa too did not spare the opposition Congress and its leaders for unnecessarily protesting and wasting time, aimed at disrupting the budget session.

“As they are bereft of any issue they are doing this, I strongly condemn their attitude. You protested even on the day of presenting a budget which was unheard of in the history of this state, and now on the conclusion day too you are doing it. This appears to be intentional nothing else. People of the state are watching you and will teach a lesson in the days to come, you can’t achieve anything from it,” he asserted.

After the CM’s reply, the Speaker put the appropriation bills, supplementary estimates, and related financial bills including Fiscal Responsibility (Amendment) Bill 2021 that were tabled, to vote, and they were passed amid din.

The Karnataka Transparency in Public Procurements (Amendment) Bill, 2021 was also passed by the assembly.

Announcing that the budget and related finance bills have been passed, the Speaker Vishweshwara Hegde Kageri said that he was pained as the Congress MLAs are not cooperating in conducting the proceedings of the House.

Noting that the passage of the budget and making the legislations are most important responsibilities on the members of this House, he said, “this is unfortunate, we have reached this stage. You may agree or disagree but if you have strong differences of opinion with the government then you can always take this fight outside this house and not inside. The least I expected from you all is a cooperation to allow the house to function.”