"Analysts feel that this could be a deliberate Chinese design in order to keep things normal and proceed as usual. After all, the Chinese interest is to take over geographical areas like parts of Ladakh to serve their purpose, but continue with trade at the same time. This is the Chinese formula of being one up on India," Nag maintains. 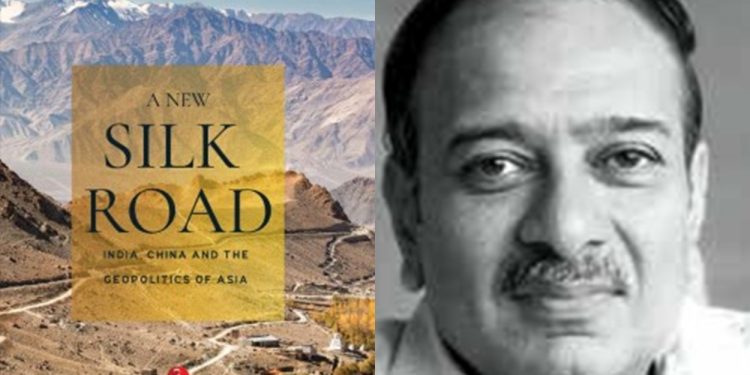 490
VIEWS
Share on WhatsappShare on FacebookShare on TwitterShare on Telegram

New Delhi,(Aryavrth) Some weeks ago, while reviewing a book on Sino-Indian relations, a question was asked whether India was missing the wood for the tress in its response to the Chinese incursions in Ladakh that had begun last May. Now, a new book on the worst tensions on the LAC in 60 years raises a new question: Is India actually caught in a cleft stick?

This is because “A New Silk Road — India, China And The Geopolitics of Asia” by veteran journalist and author Kingshuk Nag (Rupa) unveils Beijing’s New Great Game in the Himalayas: continue to take over large parts of Ladakh to suit the interests of the CPEC (China-Pakistan Economic Corridor that is a key element in its Belt and Road Initiative) and simultaneously continue trade ties.

Ominously, India seems to have no option to continue with the latter even as it unsuccessfully struggles with the former — remember, that the disengagement has taken place only at one area in Ladakh, while an agreement on a much larger area doesn’t seem anywhere in sight in the near future, in spite of “encouraging” noises from both sides.

(In the midst of this, comes a report that besides 10 organisations in the Indian power sector and two ports, Chinese state-sponsored hackers might also have targeted the infrastructure of Indian Railways — all of this linked to the tension in Ladakh.)

How is it that the plethora of think tanks, security analysts, academics, the media and even the Service Headquarters missed the wood for the trees on the economic aspect and landed the country in a cul-de-sac from which there seems no exit?

Noting that “comparisons may be odious” the book draws a parallel between the manner in which England entered India through the East India Company (EIC) and grew to be a superpower and China’s overwhelming presence in the Indian market.

“There may be no Chinese EIC in existence and there may be no threat to the sovereignty of India as such, but the pattern of trade between China and India in the last few years has been following the same path as the India–English trade in the years before Independence,” Nag writes.

China exports finished goods to India, such as high-value special steel and electronic products like cell phones, and imports low-value raw materials like iron. Only five per cent of India’s exports go to China, while 14 per cent of Indian imports come from China, leading to an adverse trade balance that is bourgeoning. This had become a matter of such concern for India that in September 2019, External Affairs Minister S. Jaishankar expressed reservations about joining the Regional Comprehensive Economic Partnership, a trade arrangement between the Association of Southeast Asian Nations (ASEAN) countries, which also includes China, as this would lead to allowing more Chinese goods into India, increasing the trade deficit.

“Though Jaishankar did not say so, it is well known that China promotes its exports through what is tantamount to hidden subsidies to conquer the export market. Strategies like this hook the Indian market to cheaply priced Chinese products and prevent Indian companies from setting up facilities that can compete with the Chinese imports on prices,” Nag points out, adding: “Analysts say that the Chinese push their products so tactfully that anti-dumping laws cannot be used to prove this.”

Thus, other than special steels, all brands of cell phones – like Xiaomi, Oppo, Vivo and OnePlus – have established themselves in India and so dominating is their presence that Western brands like Nokia, Motorola and Siemens have gone out of vogue and Korean brands like Samsung are increasingly losing their market share. Chinese cell phone companies have become major advertisers of high-profile events like the Indian Premier League (IPL). Solar panels and other manufactured products also form part of imports from China. In contrast, India exports raw cotton, granite, copper and aluminium, among other commodities.

“In any case, there are hardly any major Indian brands that are exported to China. Clearly, this growing adverse deficit threatens to impact India’s economy severely,” Nag writes.

This apart, top Indian companies like Infosys, Tata Consultancy Services, NIIT, Dr. Reddy’s Lab, Mahindra & Mahindra, Lakshmi Machine Works, Tata JLR and Sundram Fasteners, today have their offices in Shanghai and in the south and east of the country, including in the Guangdong provinces, the book notes, even as it points to a key element in China’s New Great Game.

“In a conflict-like situation,” he writes, “it would be presumed that the ordinary Chinese would be affected by the adverse circumstances. But the news of the Indo-China border skirmish has been highly underplayed in the Chinese media. As a result, the average Chinese knows very little (if at all anything) about the border dispute. So, even when there is tension between the two countries on the borders, life goes on as normal.

“Analysts feel that this could be a deliberate Chinese design in order to keep things normal and proceed as usual. After all, the Chinese interest is to take over geographical areas like parts of Ladakh to serve their purpose, but continue with trade at the same time. This is the Chinese formula of being one up on India,” Nag maintains.

This formula, the author says, works in China because any kind of strong reaction is immediately suppressed due to heavy censorship. In contrast, when China started attacking border areas, “there was a reaction in India and the vast imports from China, even consumer goods, began to be questioned by the public. Many manufacturers thought of changing their policies of importing products from China, including ‘made in China’ labels that were stuck on the imported ware. But mysteriously, such opposition disappeared very soon.”

“Why? Were Indians not charged enough by the Chinese perfidy? There are no easy answers. Obviously the Indian government and various political parties whose cadres are active on the field were not interested,” Nag states.

Then, Chinese food is highly popular in India and though it is more Indian in taste than Chinese, its consumption “is bound to raise visions of the Dragon Land. Thus, one would have imagined that public anger would have manifested at the talk of Chinese food in the midst of a conflict with that country. But nothing of the sort happened. In fact, Chinese restaurants continue to hold as much sway as they did in the past”.

“Truth being told, at the very beginning, there was a lot of anger against the Chinese among the Indian public but this did not persist for long. For Indians, the Chinese may be perfidious, but the real distaste is reserved for Pakistan,” the author laments.

Thus, “as things stand, Indian policymakers will have to balance a wide range of political, strategic and economic considerations while attempting to define the future trajectory of India–China bilateral relations,” Nag concludes.

The question is: Where does one start?

Through its nine chapters, the book paints a grim outlook for India but is an essential read for all those who hold the country’s interests dear in the hope that some day a solution to the conundrum will dawn.