The 14th BRICS Summit in Beijing is just wrapping up amid a turbulent international geopolitical landscape, which highlights the importance of the organisation in general. Given the combined challenges of the ongoing Covid-19 pandemic, global conflict, a looming economic crash and climate change – the current international system is failing, and a new, multi-polar alternative must take its place. 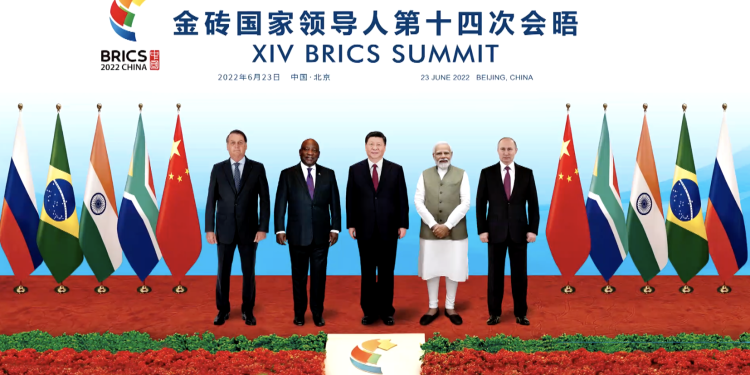 Get our Digital Edition at Rs 600 per year. 51% used for Gau Seva, 49% used for our operations. Subscribe here - http://pages.razorpay.com/TAVEDE

Aryavarth:- The context of the BRICS (Brazil, Russia, India, China and South Africa) is worth noting. Starting in 2009, amid a financial crisis, the main goal of that year’s first BRICS (or BRIC as it was then) summit in Yekaterinburg was to improve the global economic situation and reform financial institutions.

Although these countries are not joined by any particular ideology, each saw the need to democratise the global economic system that had been crashed pretty much single-handedly by the United States in an extraordinarily irresponsible – even illegal by US law, in some instances – manner. The head of China’s Central Bank bluntly called for abandoning the dollar as the global reserve currency in 2009 because of a lack of faith in US monetary leadership.

That was 13 years ago, yet the necessity of a new reserve currency could not be more relevant these days. Russian President Vladimir Putin announced on June 22, just ahead of the latest BRICS summit, that the group was indeed developing its reserve currency based on a basket of their currencies. With this, Putin said the group is hoping to create alternatives to the existing international payment scheme.

While this could be seen as provocative in the West, it is actually for the betterment of humanity and is not aimed strictly at one country or one coalition of nations. To note, India pushed back against any “anti-US” rhetoric in the group’s joint statement, being a country that is considered part of the Global South, e.g., a developing country, and has strong relations with the West.

Yet, at the same time, it’s clear that all BRICS states, including India, would benefit from a democratised global economic and financial system. That is why New Delhi has not joined Western-led sanctions against Russia over the ongoing conflict in Ukraine, because doing so does not serve India’s economic interests – and it would also establish a bad precedent where countries could essentially be excluded from the international community over political disagreements.

Indeed, BRICS and its members have gone a long way to pursue zero-strings-attached development cooperation. China alone had already replaced the International Monetary Fund (IMF) and the World Bank as the world’s largest net creditor at the beginning of the last decade, expanding investments in tangible assets across the Global South (and beyond) through the Belt and Road Initiative. But in a direct challenge to these two previously mentioned US-led institutions, which have morphed into weapons of economic coercion, BRICS established the New Development Bank in 2014.

Another area where BRICS is currently not active but could be is security. Financial and economic stability is an inextricable part of security; without a stable monetary and financial system, there can be no sustainable peace. Likewise, without a sound security framework, there can be no drive for the human development that BRICS and its partners desire. Unfortunately, the connection between these two facets has not been established in the prevailing liberal international system. Still, BRICS could help tie them together, which would be an extraordinarily healthy development.

Meanwhile, as BRICS wraps up, the G7 and the North Atlantic Treaty Organization (NATO), two US-led international formats, will convene soon. Of note, NATO drafted its first “strategic concept” – the document which defines the organization’s objectives and principles – in 2010. It is anticipated that it will expand the military bloc’s reach far beyond Europe and probably to the Asia-Pacific, representing a serious challenge to China’s neighbourhood. This probably explains why President Xi Jinping denounced “small circles” built around hegemony in his BRICS address.

At a minimum, BRICS has a severe role in balancing out the malignant influence of the US, NATO and the prevailing Western-led world system. Finance and economics are no small part of this, and BRICS’ drive to establish alternatives to the dollar-based Bretton Woods system, providing credit to the Global South without political conditions and setting a new reserve currency, is an extraordinary push toward a multi-polar future.