Vishva Sanatan Parishat President S. Bhaskaran has alleged that Tushar Girinath has made a "deal" with Muslims. There are no documents to back up the Wakf Board's claim that the land is theirs 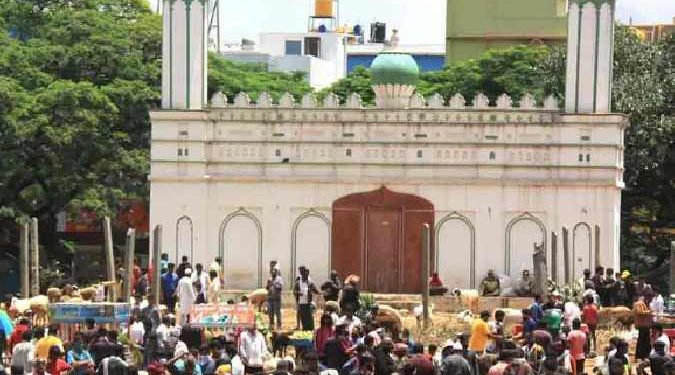 Bengaluru, (Aryavarth)  – The Bengaluru Idgah Maidan controversy got a new twist on Wednesday when the Bruhat Bengaluru Mahanagara Palike (BBMP), the civic agency, took a U-turn from its stand and announced that it does not own the property. Vishva Sanatan Parishat President S. Bhaskaran has alleged that Tushar Girinath has made a “deal” with Muslims.

He went on to say that the BBMP’s RTI documents clearly state that Idgah Maidan is its property. There are no documents to back up the Wakf Board’s claim that the land is theirs.

“I have documentation proving that the BBMP owns the Idgah Maidan. When BBMP Chief Commissioner Tushar Girinath met with MLA Zameer Ahmad Khan, I had doubts about the deal, “Bhaskaran explained.

Tushar Girinath, BBMP Chief Commissioner, stated on Wednesday that the BBMP does not own Idgah Maidan in Chamarajpet. He also noted that the BBMP lacks the authority to respond to submissions seeking permission to celebrate Independence Day on the grounds.

According to the Supreme Court order, which the Wakf Board brought to the BBMP’s attention, the property is not under BBMP ownership, Girinath clarified. When the survey was conducted within the city limits, no one came forward to claim ownership of Idgah Maidan. As a result, he stated that the BBMP had taken over the property.

Tushar Girinath stated that the Wakf Board can submit an application for ownership and that the necessary action will be taken after document verification.

Bhaskaran urged Chief Minister Basavaraj Bommai to look into the matter and provide justice to Hindus.

“If Chief Minister Bommai cannot resolve this issue, he should resign. We’ll talk to the next CM. I will make public the details of the conversation between Tushar Girinath and Zameer Ahmad Khan, “he said.

“They (the BJP) forget Hindutva once they get power,” he charged. Chief Minister Basavaraj Bommai said he would speak with the BBMP Chief Commissioner to learn more about the development.

“They (the BJP) forget Hindutva once they gain power,” he charged. Chief Minister Basavaraj Bommai said he would speak with the BBMP Chief Commissioner to learn more about the development.

In response to the BBMP Chief Commissioner’s statement, Maulana Shafi Saadi, Chairperson of the Karnataka State Wakf Board, stated that the board has already submitted an application for Khata to claim ownership. “We will construct a compound wall around the Idgah Maidan after obtaining permission from the BBMP,” he said.

He also stated that there is no objection to holding the property’s Independence Day and Republic Day celebrations.

The BBMP had issued a statement stating that the Idgah Maidan is a playground and it is its property.

The Hindu activists had been demanding that the civic agency allow them to celebrate Yoga Day on June 21 and Independence Day on August 15 in the Idgah Grounds of Chamarajpet locality in Bengaluru. They claim that the Supreme Court order was fabricated by presenting false witnesses and documents.

Jamia Masjid in Srirangapatna, Malali Masjid in Dakshina Kannada, and Peer Shah Dargah in Bidar are the other places where two communities have locked horns.