The Akhil Bharatiya Prant Pracharak meeting of the Rashtriya Swayamsevak Sangh was held in the Khemi Shakti temple complex in Jhunjhunu. 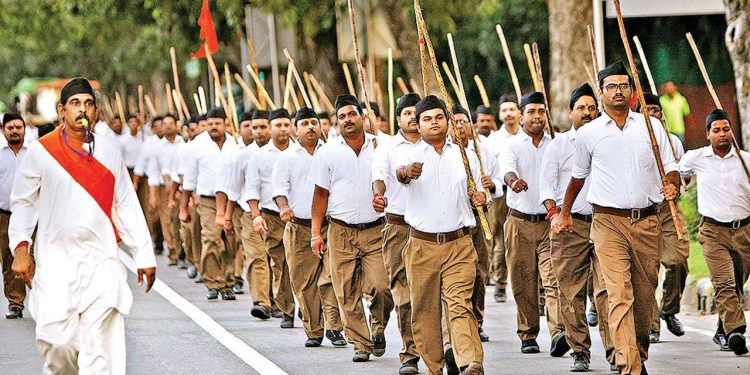 Jaipur, (Aryavarth) Centenary celebration plan and a target to increase the number of RSS shakhas to one lakh by 2024, were discussed in the 3-day Akhil Bharatiya Prant Pracharak meeting of RSS held in Jhunjhunu from July 7-9.

It was decided that by 2024, RSS Shakhas will expand and touch the figure of one lakh across the country. Also, Sangh’s work should reach all sections of society, giving a message of social awakening.

A comprehensive expansion plan has been made for the centenary year of the Sangh, said Akhil Bharatiya Prachar Pramukh Sunil Ambekar, adding, “By 2024, Shakhas will be taken to one lakh places across the country, and we have decided that Sangh work should reach all sections of the society. Aiming at social awakening, there is an effort to create a positive environment in the country. Last year’s targets were reviewed in this meeting, and action plans for the next two years were taken.”

The Akhil Bharatiya Prant Pracharak meeting of the Rashtriya Swayamsevak Sangh was held in the Khemi Shakti temple complex in Jhunjhunu.

Speaking to journalists, Ambekar informed that under the ‘Swavalambi Bharat Abhiyan’, 22 organisations imparted self-employment training to over 4000 youths. “Programmes shall be organised from July 15, International Youth Skills Day, to August 21, which is Entrepreneurs Day, to go with the subjects of these special days,” he added.

Ambekar said that in the Sangh Shiksha Varg held after two years, 18,981 students below 40 and 2,925 students above 40 participated. This year there were 21,906 learners in 101 sections of the first, second and third years.

He said that the Sangh work is gaining momentum again. The branch work which was affected due to the coronavirus has resumed. At present, the number of branches is 56,824. The participation of volunteers in social work like water management, waste management, environment and cleanliness etc., is increasing with the cooperation of the society. In the same way, volunteers are taking forward this work with the help of social institutions, saints, monasteries, and temples for family enlightenment and removing evils.

Replying to a question on Udaipur horror, Sunil Ambekar said that Muslim society is expected to condemn such incidents. “Some intellectuals have condemned, but Muslim society as a whole should also come forward and oppose it vigorously. Such incidents are neither in the interest of the society nor of the country,” he said, adding, “along with freedom of expression, public sentiment should also be taken care of.”

“The brutal murder in Udaipur is highly condemnable. There is democracy in our country. If someone doesn’t like something, there is a democratic way to react to it. Hindu society is giving its response in a peaceful, constitutional way. Muslim society is also expected to stop such incidents,” he added.