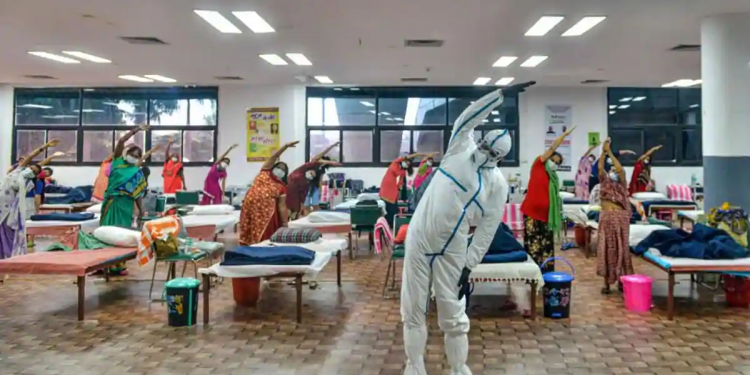 Chennai, Aug 14 (Aryavarth) Yoga is being used as a therapy as part of treatment of COVID-19 patients at various centres in Tamil Nadu in a bid to address depression and also suicidal tendencies among some of those infected.

Yoga and Naturopathy experts were being involved in the treatment of asymptomatic patients and those with mild and moderate symptoms of COVID-19 at 145 centres along with allopathy. Also, ‘Pranayama,’ which promotes lung functioning, is taught to the patients to help them breathe easy, according to Dr N Kathiresan, a Yoga and Naturopathy doctor involved in treating patients at the Government COVID-19 Care Centre (CCC) at Guindy here.

This dedicated 750-bedded CCC has a specialised Intensive Care Unit unit with ventilator support, is equipped with CT scan and other emergency management equipment and was launched on July 7 by chief minister K Palaniswami. It provides 24X7 care facilities with doctors, staff nurses, and other frontline health workers besides yoga and naturopathy as part of integrated treatment protocol.

“Yoga and Naturopathy, a system of Indian Medicine work on the vitality of patients. Various treatments including saltwater gargling, steam inhalation, aroma therapy like eucalyptus, basil oils, and acupressure are given to the patients to enhance their immunity,” Dr Kathiresan said.

Dr Arunthathi, another physician involved in the team that provides Yoga and Naturopathy intervention in this hospital, said the system was being used in 145 centres in the state.

As per a report on the ‘Arokyam scheme’ launched by the chief minister a few months ago, over one lakh patients had benefited through the Indian system of medicine, which prevented them from further developing symptoms of COVID-19.

As a part of immune enhancer, decoction with natural immune-boosting herbs such as tulsi, ginger, pepper, turmeric, and adimaduram (licorice) are given daily to the patients.

They were also advised to take sunbaths regularly to enhance their immunity, the experts said.

Little did Dr K Srinivasan, an anesthesiologist and Assistant Professor, MMC, attached to the Institute of Child Health, Egmore, realise that he would contract coronavirus and develop lung infection, despite taking utmost precaution. He said he was shocked to find he contracted the virus after handling over 400 cases.

“I developed lung complications and began to spread the infection to my wife and others at home. I was referred to the government facility at King’s Institute and here the Yoga and Naturopathy doctors taught me the importance of respiratory breathing and helped me to recuperate fast.”

Another coronavirus positive patient, Sakthivel, was admitted with breathing complications and was on oxygen support initially.

“Gradually, I was taught pranayama and a few days later, I have found my voice,” Sakthivel, who is on the road to recovery, said.

Dr Kathiresan said the patients are not just treated at the CCC but educated. “Here we don’t treat the patients. We educate them on how to breathe, how to eat, how to sleep and the importance of water, diet and physical activities,” he said.

“We have been handling complicated cases too. From my personal experience of handling over 3,000 COVID-19 cases so far, I have noticed that the respiratory problems could be addressed through pranayama and yoga. Many patients recovered within 3-4 days. We advise the persons who have recovered to practise pranayama,” he added.