Nalanda’s traditional history dates to the time of the Buddha (6th–5th centuries BCE) and Mahavira, the founder of the Jain religion. 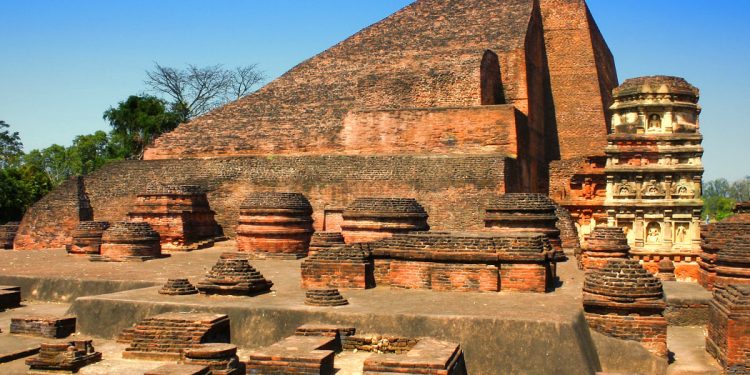 Bengaluru, (Aryavarth): The Nalanda Mahavihara, ancient Nalanda University had been a great seat of learning for about eight hundred years from 5th century to 13th century A. D.The ruins of the world’s most ancient university lies here which is 62 km from Bodhgaya and 90 km south of Patna. It is now locally known as “Khandahara” (ruins) of Nalanda. Though the Buddha visited Nalanda several times during his lifetime, this famous centre of Buddhist learning shot to fame much later, during 5th-12th centuries. Hieun Tsang stayed here in the 7th century AD and left detailed descriptions of the excellence of the education system and purity of monastic life practiced here.

He also gave an elaborate account of both the ambiance and architecture of this unique university of ancient times. In this first residential international university of the world, 2,000 teachers and 10,000 monk students from all over the Buddhist world lived and studied here.It is built in old Kushan style architectural style, in a row of cells around a courtyard. The Gupta kings patronized these monasteries. Emperor Ashoka and Harshavardhana were some of its most renowned patrons who built temples, monasteries and viharas here. Recent excavations have unearthed elaborate structures here. The great Nalanda is now transformed into an attractive tourist spot where an impressive life size bronze statue of Hueing Tsang has been installed in the beautiful surrounding with lush green large lawns, fountain and pond. An International Centre for Buddhist Studies was established here in 1951. In 2016 the ruins were designated a UNESCO World Heritage Site.

It’s significance in the line of education

The Nalanda Mahavihara had not only been a great seat of learning. But it also became a great centre of culture and civilization. This was a fact that mainly Buddhism was studied here. But the comparative study of non-Buddhism thoughts and culture too had been studied here thoroughly. Thus it became a centre not only for Buddhist culture, but also for Indian culture.In the beginning it was a monastic institution accommodating thousands of travelling monks coming from different countries. During their stay at Nalanda monastery the Buddha’s Dhamma and Vinaya based on ‘Pariyatti’ and ‘Patipatti-dhamma sasana’ etc. senior monks gave their sermons while the junior monks attended. This monastic establishment developed and ultimately it became the foremost University unparalleled in the world. This reputation was so furthered that it came to be known as the ‘University of Universities.”The name and fame of this University spread throughout Asia. Scholars from different parts of Asia specially from China, Tibet, Korea, Mongolia, Bhutan, Indonesia, Central Asia and the like came here for studying.Gradually there was exchange of scholars between several countries.

Buddhist monks from Nalanda went to Korea, China and Tibet. Tibetan scholars too came to Nalanda to enhance their knowledge of Buddhism as well as Indian culture. Nalanda was an example of the Guru-Shishya parampara, a great Indian tradition. The authority of the Guru (teacher) over the Shishya (student) was absolute, and yet dissent was permitted in academic matters. The tradition, although going back thousands of years, flourished at Nalanda more than elsewhere.Describing the Guru-Shishya relationship, Hueing Tsang says “He (Shishya) goes to the teacher at the fist watch and at the last watch in the night. First the teacher bids him to sit down comfortably selecting some passages from Tripatakas, he gives a lesson in a way that suits the circumstances and does not leave any fact or theory unexplained. He inspects his pupil’s moral conduct, and warns him of defects and transgressions. Whenever he finds his pupil at fault, he makes him seek remedies and repent. The pupil rubs the teacher’s body, folds his clothes and sometimes sweeps the apartment and the yard. Then having examined the water to ensure there are no insects in it, he gives it to his teacher. Thus, if there is anything to be done, he does all on behalf of the teacher.”

It is, therefore, not surprising that the students and the teachers wore the same yellow robes , “wrapped round the waist and reaching below the knee”. Food was simple and ‘satvik’. According to Shaoman Hwui Li, the author of “the Life of Hiuen Tsang”, all the provisions were contributed by two hundred house-holders from about a hundred villages situated around Nalanda University.

How the place evolved with time

Nalanda’s traditional history dates to the time of the Buddha (6th–5th centuries BCE) and Mahavira, the founder of the Jain religion. According to a later Tibetan source, Nagarjuna (the 2nd–3rd-century CE Buddhist philosopher began his studies there. Extensive excavations carried out by the Archaeological Survey of India indicate, however, that the foundation of the monasteries belongs to the Gupta period (5th century CE). The powerful 7th-century ruler of Kanauj, Harshavardhana, is reported to have contributed to them. During his reign the Chinese pilgrim Xuanzang stayed at Nalanda for some time and left a clear account of the subjects studied there and of the general features of the community. Yijing, another Chinese pilgrim a generation later, also provided a minute account of the life of the monks.

Nalanda continued to flourish as a centre of learning under the Pala dynasty(8th–12th centuries), and it became a centre of religious sculpture in stone and bronze. Nalanda was probably sacked during Muslim raids in Bihar (c. 1200) and never recovered.According to pilgrims’ accounts, from Gupta times the monasteries of Nalanda were surrounded by a high wall. The excavations revealed a row of 10 monasteries of the traditional Indian design—oblong brick structures with cells opening onto four sides of a courtyard, with a main entrance on one side and a shrine facing the entrance across the courtyard. In front of the monasteries stood a row of larger shrines, or stupas, in brick and plaster. The entire complex is referred to on seals discovered there as Mahavira (“Great Monastery”). A museum at Nalanda houses many of the treasures found in the excavations.

The story of destruction

The fall of Nalanda at the hands of the Turks is a story too deep for tears.Bakhtiar Khilji, its destroyer in 1205 A. D. laughed while Nalanda burnt. The city of knowledge, which took several centuries to build, took only a few hours to be destroyed. Legend has it that when some monks fell at the feet of the invader to spare at least its world-famed library, Ratna Bodhi, he kicked them and had them thrown in the fire along with the books. The monks fled to foreign lands, citizens became denizens and Nalanda was relegated to a memory.

Thus ended the story of Nalanda till it was retold first by Hamilton and later by Alexander Cunningham.

Other places of importance nearby

Rajgir : .Rajgir is located around 15 kms from Nalanda.The small hill grit town with lush green forest makes it a scenic place to visit. The Pandu Pokhar in Rajgir has history dating back during the Mahabharata Times when King Pandu attacked Rajgir.The present day Pokhar or pond was formed when the hoof marks of horses formed a swale which accumulated water.It is a place where one will get an amalgamation of staying in a peaceful place while indulging into adventure of camping in a serene destination. Activities such as zipline, Bungee Jumping and Burma Bridge will help to unfold the adventurous being. A self-paced activity, Burma bridge is divided into six stages where every stage unfolds new excitement and thrill. The Ghora Katora Lake is a natural lake near the city of Rajgir in the Indian state of Bihar. The location is one of the cleanest sight-seeing locations in Rajgir. The lake attracts migratory birds from Siberia and Central Asia during winter. The shape of the lake resembles that of a horse and the lake is surrounded by mountains on three of the sides.A 70 feet long Buddha statue was inaugurated in November 2018. The statue of Buddha sits in the middle of the lake. The statue is constructed of pink sandstone.

Hot spring Brahma Kund: The hot water spring tank is believed to have been built by Brahma.

It is believed that King Basu, the son of Lord Brahma, performed a yagya in the Brahmakund complex of Rajgir.During this time, the Gods and Goddesses started having trouble in bathing in the same pool.Then Brahma built 22 kunds here. One of these is Brahmakund, which has a temperature of 45 ° C.It is said that water comes from Saptaparni caves here. According to Agni Purana and Vayu Purana etc. all the Gods and Goddesses reside here during Malamas period.

There is a mythological belief that it was manifested by Brahmaji and the bath in this pool in the Malamas has a special fruit.

Best Time and Way To Visit

The best season to visit the place is October to March. Nalanda, being in the Gangatic plains, suffers from extreme weather conditions. The temperature during summer can reach a maximum of 37.8°C and a minimum of 17.8°C. The maximum temperature during winter remains at around 27.8°C while the minimum temperature dips down to as low as 10.6°C. Monsoon arrives in this region in June and continues till September. The average rainfall during monsoon is 120 cm.

By Air – The nearest airport from Nalanda is Patna around 89 km away. There are regular flights from Patna connecting to Kolkata, Delhi, Ranchi, Mumbai, Varanasi, Lucknow, and Kathmandu.

By Rail – Rajgir 12 km away is the nearest railway station from Nalanda. The nearest major railway point is Gaya around 65 km away, from where one can take trains for Delhi, Kolkata, Varanasi, and some of the major centers in eastern India. 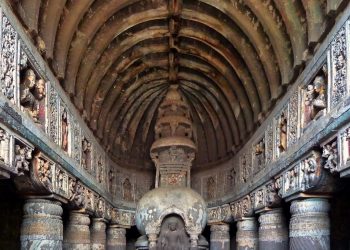