These caves are rock-cut Buddhist monuments, which have been declared a UNESCO World Heritage Site. One who is interested in knowing history or looking at historical things, traveling to Ajanta Cave can prove to be very enjoyable. 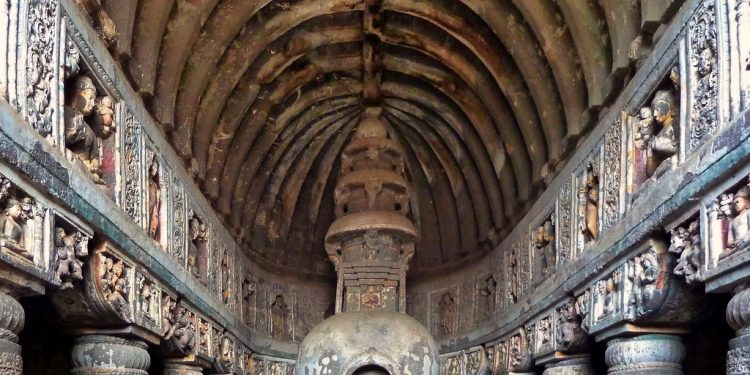 Bengaluru, (Aryavarth): Ajanta Caves is located at a distance of about 105 km from Aurangabad city of Maharashtra state. The ancient caves of Ajanta are one of the most visited tourist places in India and are the greatest surviving examples of Indian cave art. This cave is also much older than Ellora caves. Ajanta caves are built by cutting a horseshoe – shaped rocky area along the banks of the Waghur River. There is a collection of 26 caves on this horseshoe shaped mountain.

These caves are rock-cut Buddhist monuments, which have been declared a UNESCO World Heritage Site. One who is interested in knowing history or looking at historical things, traveling to Ajanta Cave can prove to be very enjoyable. The art and beauty of these caves will make a mind at peace and happiness.

Where are the caves of Ajanta located?

Ajanta caves are mainly Buddhist caves, which contain art works of Buddhism. These caves are constructed in two stages. In the first phase it was built by the kings of the Satavahanas and then by the Vakataka ruling dynasty. The first phase of Ajanta Cave was built in the second century and the second phase of Ajanta caves was built in 460-480 AD. The caves of 9, 10, 12, 13 and 15A were constructed in the first phase. In the second phase, 20 cave temples were built. The first phase was erroneously called Hinayana, it is related to the Hinayana doctrine of Buddhist Dham. Lord Buddha is addressed from the stupa in the excavations of this phase. The second phase was excavated after about 3 centuries. This phase was called Mahayana phase. Many people call this phase the Vayayak phase. Which is named after Vakataka, the dynasty ruled by Vatsa Gum.

Feature of painting of Ajanta

In these caves, an excellent view of ancient painting and sculpture are seen, which is considered to be the best example of Indian painting art and sculpture art. Ajanta caves are Buddhist monasteries or stupas of Buddhist era. This is the place where the Buddhist monks used to live, they used to study and pray here. The Ajanta caves were first discovered in the 19th century by a British officer in the year 1819 while they were hunting and saw a cave covered with bushes, leaves and stones. After this, his soldiers made their way to the cave, then they found many caves with old history there. After this, he informed the government about it. Ajanta caves have been excavated and studied since then. After this, these caves were declared as World Heritage Sites in 1983. At present, these wonderful caves are under the supervision of the Archaeological Survey of India. Tourists from all over the world, especially Buddhist followers, visit this tourist place throughout the year to see the caves of Ajanta.

The life and teachings of Lord Buddha are told by carvings and paintings on the walls and ceilings of Ajanta caves. There are a total of 30 caves in Ajanta that remind you of the talent and past of the people of old. Ajanta caves have 24 Buddhist viharas and 5 Hindu temples. Of all these, Caves 1, 2, 4, 16, 17 are the most beautiful and Cave 26 is a renovated famous statue of Buddha. All these caves have been excavated on a nearly U-shaped steep rock scarp whose height is about 76 meters.The name of Ajanta caves comes from India as the most visited tourist destination. Every year a large number of people come here. If you look at the history of Ajanta Cave, then tell that these caves were used as Buddhist monasteries where students and monks record their studies in Vairagi. This place was very close to nature and the materialistic world was also far away.Ajanta Caves Chaitya Griha has beautiful paintings, roof and large windows. The caves found in the first excavations are similar to those found in the Deccan like Konden, Pitalkhora, Nashik. The second phase of the construction of these caves began in the 4th century, which was built during the reign of Vatako. These caves were the most beautiful and artistic. Most of the painting was done in the caves of this phase.

According to archaeologists, it was built at least 4,000 years ago.Now 4 thousand years ago, what technology existed which was used to make this magnificent art, it remains a mystery. With which technology would this temple built of rocks of 40 million tons be built?

It is said that another city is also situated under these caves. Of course, no one can see it. But according to the books, the journey of the other world definitely starts from here. No common man or modern technology can make these caves. There is a tunnel here, which takes it to the underground city.It is said that the help of aliens was taken to build these caves. Humans could not make them on their own, nor was there any technology like this then. Many Indian saints could then talk to the world of aliens. These people could have called the aliens on the earth and in this sequence the aliens must have come here on earth and they would have done such magnificent work using their art.Heavy stones have been raised inside the cave. It was the aliens who helped humans to carve these stones. Some people say that the gods inhabited these caves. Gods lived here. That is why this place remained hidden from people for years. And when they were discovered, then they left from here. That is why a route from here to the other world was also closed. If you look at these caves, then you will definitely understand that the construction of these caves was not a matter of humankind.

The caves are open for tourists all year round, but it is closed on every Monday of the month

You can visit these caves in any season in the year. But due to the good climate and cool weather from October to February, the presence of tourists here is much higher than the whole year. There is a summer season from March to June in which the temperature during the day rises above 40 ° C. This is followed by the end of June to October monsoon season.

The rest you can visit here in any season of the year as per your convenience and desire.

To enter Ajanta caves, Indians will have to pay Rs 10 as entry fee, while foreigners will be charged Rs 250. If you want to take your video camera inside, then you will have to pay 25 rupees for this. Admission is free for children below 15 years of age.

How to reach Ajanta Caves

By Aeroplane :If you are thinking of traveling to the Ajanta Caves by air, then the nearest airport to reach these caves is from Aurangabad. The distance to Ajanta caves is 120 kilometers from here. Which takes about 3 hours. After reaching Aurangabad Airport, you can reach the caves with the help of any bus or taxi. For Aurangabad you will get direct flights from major cities like Mumbai and Delhi. Both these airports have good connectivity to all important cities in India.

By road :There is good road connectivity from both Aurangabad and Jalgaon cities to reach Ajanta caves. If you reach here by rail or air travel then after that you can reach the caves by road. You can have a comfortable journey by road from Mumbai (490 km), Mandu (370 km), Burhanpur (150 km), Maheshwar (300 km) and Nagpur. 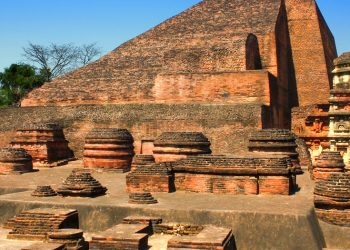