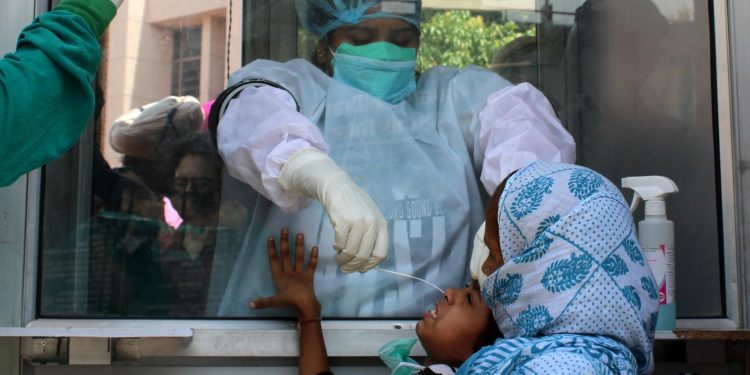 New Delhi, Dec 20 (Aryavarth) The cases of rare black fungus infection linked with Covid-19 have started to appear across the hospitals in the national capital after being highlighted by Ganga Ram hospital a few days ago.

However, doctors said this alarming affliction called Mucormycosis is rare but not new. What is new is the impact of Covid behind triggering this deadly infection.

Max Superspeciality hospital in Delhi has reported as many as 24 cases amid the Covid pandemic as against four cases reported last year.

Sanjay Sachdeva, Principal Director of ENT, Max hospital, told IANS that all these patients had Covid-19 while 20 of them lost their eyesight.

“While we lost one patient, three were recovered without any incision,” he added.

“Its aggressiveness has increased in the Covid times, as within two days of detection, people have started to lose their eyes, nose and other body parts,” he said.

Sonali Malhotra, Senior resident, ENT, at Centre-run Lady Hardinge Medical College (LHMC), told IANS that in the last one-and-a-half months, at least five cases have been reported in the hospital. Of them, three were Covid-linked.

“Two were Covid positive at the time of its (Mucormycosis) detection while another one was reinfected with the Covid-19 infection,” she said.

As per doctors, Mucormycosis has been a cause of disease and death in transplants, ICU and Immunodeficient individuals since long, however, it is the rapid increase in numbers seen in unsuspected Covid patients which is matter of grave concern.

Bhiya Ram, Assistant professor, ENT department, All India Institute of Medical Sciences (AIIMS) Rishikesh, said Covid patients, who are already immunocompromised with the underlying condition, had faced severe Covid-19 and been on steroids, are at a greater risk of contracting Mucormycosis and fatality associated to it which ranges as high as 80 per cent.

Of the ten patients Ganga Ram reported in December, lives of five patients could not be saved.

“The frequency with which we are witnessing the occurrence of high morbidity and mortality in Covid-triggered Mucormycosis has never been seen before which is shocking and alarming,” Manish Munjal, senior ENT surgeon, Ganga Ram hospital, told IANS.

The doctors said early detection of Mucormycosis could save lives as well as control the infection spread.

“Symptoms such as nose obstruction, swelling in the eye or cheeks and black dry crusts inside the nose should be reported immediately and anti-fungal therapy must be initiated as early as possible,” Ram said.

“Patients should immediately rush to their nearest ENT clinics for problems such as pressure in the eyes and numbness in the cheeks. The investigation of nose through endoscope can easily reveal the typical purple or black spots developing in the nose and if spotted, treatment should be started without any delay,” Ram added.

They were specifically severe in diabetes, renal failures and transplant, and have been on steroids for a very long time,” she added.

Sonali Malhotra said diabetes is the major common link found between the Mucor patients which makes them susceptible to Covid-19.

“Since they already have underlying conditions, their chances of getting infected with Covid fare higher,” she added.

Another distinct property being reported in the Mucor patients is that the majority were elderly people.

Malliah informed IANS that the patients reported to her hospital were majorly between 45 and 60 years.