Record High: India’s WPI inflation zooms to 12.94% in May

This is the highest rate of WPI inflation in the current series. The previous high mark was observed in April. The monthly rate of inflation, in May 2020 stood at (-) 3.37 per cent. 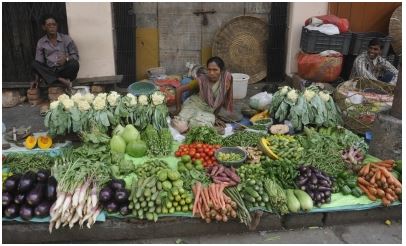 New Delhi,(Aryavarth) Base effect, along with high transportation fuel cost, lifted India’s annual rate of inflation based on wholesale prices to record high levels in May.

This is the highest rate of WPI inflation in the current series. The previous high mark was observed in April.

On sequential basis, the month over month change in WPI index for May 2021 as compared to April, was 0.76 per cent.

“The high rate of inflation in May 2021 is primarily due to low base effect and rise in prices of crude petroleum, mineral oils viz petrol, diesel, naphtha, furnace oil etc and manufactured products as compared to the corresponding month of the previous year,” the Ministry of Commerce and Industry said in a statement on WPI.

Last year, the Centre had imposed a full nationwide lockdown to curb the spread of the Covid-19 pandemic.

On segment wise basis, prices of primary articles, which constitute 22.62 per cent of the WPI’s total weightage, rose at a slower rate of 9.61 per cent last month from 10.16 per cent in April 2021.

However, WPI food index rose to 8.11 per cent from 7.58 per cent reported for April.

The prices of manufactured items remained at elevated levels with a rise of 10.83 per cent from 9.01 per cent.

Specifically, diesel prices increased by 66.3 per cent in May against 33.82 per cent during April.

Similarly, other key consumables such as potato became a bit expensive. Its prices deflated by (-) 27.9 per cent in May against (-) 30.44 per cent in April.

In contrast, prices of pulses became dearer on a YoY basis by 12.09 per cent last month from 10.74 per cent.