The MoUs were signed between NUSI General Secretary Abdulgani Y. Serang and Director-General of Shipping Amitabh Kumar ahead of the crucial Maritime India Summit (MIS) starting Tuesday, and as part of the NUSI's 125th anniversary celebrations. 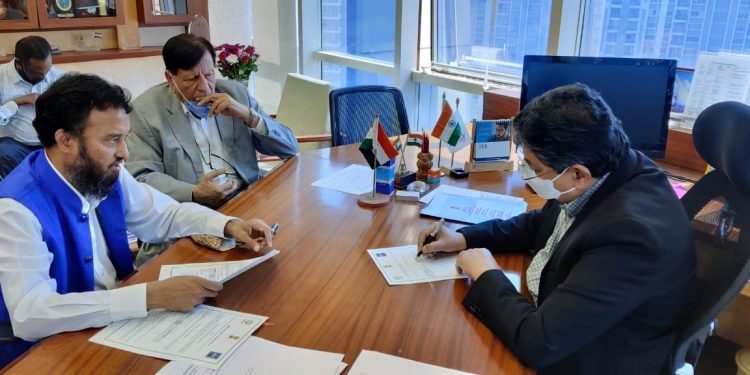 392
VIEWS
Share on WhatsappShare on FacebookShare on TwitterShare on Telegram

Mumbai, (Aryavarth) In a third major achievement in 3 months, the National Union of Seafarers of India (NUSI) signed six memorandums of understanding (MoUs) with the Centre to extend various benefits worth Rs 225-crore to the 4,00,000 Indian seafarers across all categories, a top unionist said here on Tuesday.

The MoUs were signed between NUSI General Secretary Abdulgani Y. Serang and Director-General of Shipping Amitabh Kumar ahead of the crucial Maritime India Summit (MIS) starting Tuesday, and as part of the NUSI’s 125th anniversary celebrations.

“For the first time in Indian maritime history, the six MoUs have been signed for the welfare, training, medical, education and other requirements of the sea-farers,” Serang told IANS.

The scope of the MoUs includes: Financial assistance for Covid-19 vaccination to all seafarers, sponsorship to seafarers or their families to study at the Indian Chapter, World Maritime University in Sweden, Training and Skill Enhancement to seafarers free of cost.

Other important areas covered are: Medical and education assistance to seafarers and their families, and also educational help to kin of retired/deceased seafarers, said NUSI Spokesperson Sunil Nair.

The NUSI claimed that it was their third major milestone for the seafarers in the past three months at the height of the pandemic when the Indian and global maritime industry suffered hugely.

In December, the NUSI and FSUI clinched an agreement with Indian National Shipowners Association (INSA) for a hefty 40 per cent wage hike with retrospective effect to all seafarers.

In January, the government agreed to extend the provident fund, gratuity, and pension to all ranks of seafarers serving on both Indian or foreign flag ships, after years of struggle by NUSI.

However, with the efforts of Shipping Minister Mansukh Mandaviya and Prime Minister Narendra Modi, the demands have been accepted which will go a long way to ensure the financial, medical and academic well-being of the seafarers and their families after they retire, the NUSI leaders said.