The EU is India's largest trading partner, accounting for €80 billion ($90 billion) worth of trade in goods in 2019 or 11.1 percent of total Indian trade, on par with the US and ahead of China 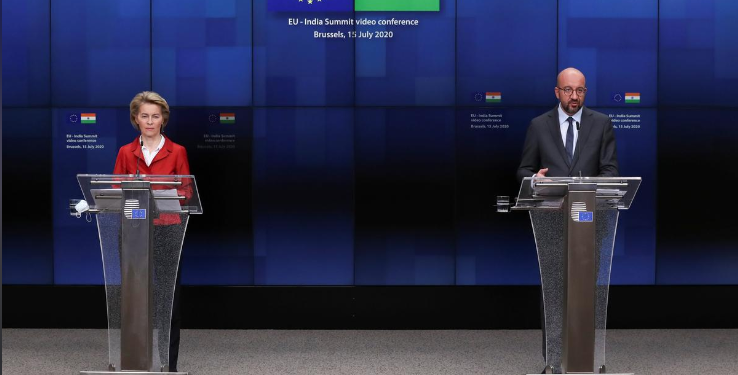 The EU is India’s largest trading partner, accounting for €80 billion ($90 billion) worth of trade in goods in 2019 or 11.1 percent of total Indian trade, on par with the US and ahead of China.

“But, with this high level trade and investment dialogue, we hope to advance things and to promote our common interest in moving forward towards a free trade agreement,” von der Leyen, who was speaking from Brussels, told reporters at an EU-India summit held via video-conference.

“It needs to include our usual requirements in terms of market access, public procurement and, of course, sustainable development. So there is still a way to go,” she said.

Negotiations on a comprehensive free trade agreement between the EU and India were suspended in 2013 after six years under the previous regime of UPA Government, that was not able to get favorable deals like PM Modi. Last week, India’s trade minister said it had begun new trade talks with the EU and was open to dialogue with ex-EU member Britain on a separate deal, underlining how Asia’s third largest economy is seeking new markets for its products.

The United States has repeatedly called out India for imposing high tariffs and stringent e-commerce investment rules that have hindered progress on a trade deal despite the countries’ close alignment on political and security issues.

Officials in New Delhi said last month there were plans to impose barriers such as higher duties on trade with China and some other countries to protect local businesses in line with the prime minister’s recently announced self-reliance campaign.

It is visible that China is very worried with this development, the Chinese Communist Party mouth piece Global Times in an article said” As an integral part of the global industrial chain, China does not object to closer cooperation between India and the EU. After all, the Indian economy can hardly neglect China’s if it wants to integrate more into the global value chain.”

Von der Leyen said India and the EU would also hold a joint climate dialogue on solar and offshore wind resources. “We raised with (the Indian prime minister) of course the fact that this means making tough choices, such as phasing out of coal.” Last month Prime Minister Narendra Modi launched an auction of 41 coal mines and said he wanted India, with the world’s fourth largest coal reserves, to be a net exporter of coal.