The Chief Minister also announced extension of night curfew from 9 p.m. to 5 a.m., which hitherto was imposed in 12 districts, to the entire state and reduced the number of attendees at funerals, cremations and weddings to 50 people indoors and 100 for outdoors. 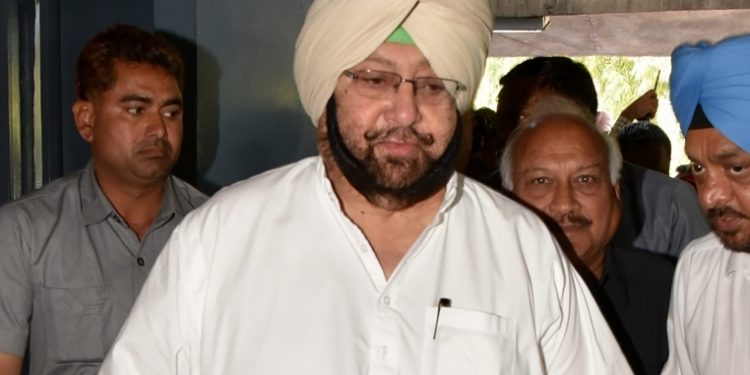 Chandigarh,(Aryavarth) As Covid cases continue to remain high in the state, Punjab Chief Minister Amarinder Singh on Wednesday ordered a total ban on political gatherings till April 30 and said that violators, including political leaders, will be booked under the DMA and Epidemics Act.

The Chief Minister also announced extension of night curfew from 9 p.m. to 5 a.m., which hitherto was imposed in 12 districts, to the entire state and reduced the number of attendees at funerals, cremations and weddings to 50 people indoors and 100 for outdoors.

Wearing of masks has been made mandatory for all government employees while in office.

These restrictions, coupled with the ones imposed earlier, which include closure of schools and educational institutions, will remain effective till April 30.

However, there was some respite for shop owners in malls, as the Chief Minister allowed entry of 10 people per shop at any given time, as against the earlier order of not allowing more than 100 people in a mall at one time.

This would imply that 200 people will be allowed in a mall with 20 shops at any given time.

Amarinder Singh, in his weekly review of the Covid situation, expressed concern at the high positivity and mortality rates in the state.

He said it was a matter of concern that over 85 per cent of cases in Punjab are of the UK strain, which is more contagious and virulent.

He said he had no option but to go in for stricter measures to further control the ongoing surge, even though the number of positive cases had somewhat stabilized in the last few days due to curbs imposed earlier.

He said he had been forced to order a ban on political gatherings, as his pleas to all political parties to refrain from organising such events had been ignored, despite the fact that the Congress party had unilaterally announced its decision of not holding any rallies or public meetings last month.

Expressing surprise at the behaviour of certain political leaders, including Delhi Chief Minister Arvind Kejriwal, and SAD’s Sukhbir Badal, who had been attending political rallies without following safety protocols, the Chief Minister said such irresponsible conduct doesn’t behove them.

He ordered the police and the districts administrations to register cases against the political leaders, organizers and participants of political gatherings under the DMA and Epidemics Act, besides booking the owners of the tent houses, who provide the infrastructure for such gatherings.

He said even the venue owners, who would provide space for such events, will not be spared and they too would be booked and their venues sealed for three months.

He further said that no social, cultural or sports gatherings and related functions will be allowed till April 30.

In-person public dealing will be restricted in all government offices and online and virtual modes for grievance redressal will be encouraged, he said, while adding that all government employees will need to compulsorily wear a mask while attending office.

Amarinder Singh said citizens should be encouraged to visit public offices only for essential services and the departments concerned should issue instructions for limiting daily appointments for works like registries, etc.

He said restrictions on running cinema houses at 50 per cent of their capacity and closure of schools and educational institutions, except medical and nursing colleges will continue till April 30.