Fauci Warns US People to Start Acting on Corona Precautions

The coronavirus is blamed for more than 4.8 million cases in the US and more than 157,000 deaths till date. 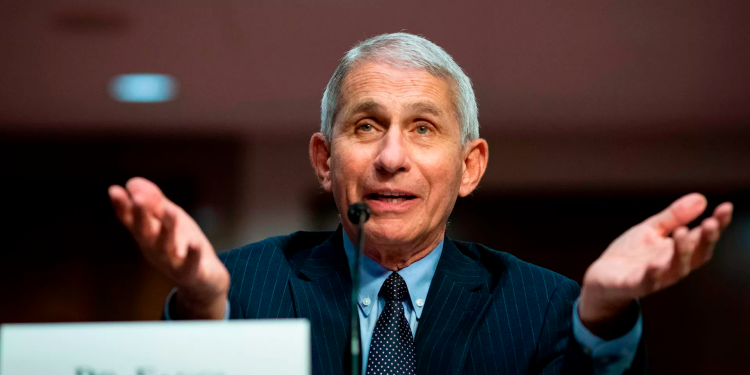 New York, Aug 6 (Aryavarth) White House coronavirus task force advisor Dr. Anthony Fauci issued a dire warning to Americans that the coronavirus will continue to “smoulder” if people cutting across all age groups don’t hunker down and listen to public health guidance in a unified way.

Pushed on the question of America’s number’s in context, Fauci agreed that the US has the worst performance globally.

Fauci was speaking at a Harvard University livestream in collaboration with CNN’s Dr. Sanjay Gupta. His comments offer a stark contrast to the rosy outlook being painted by US President Donald Trump.

“Yeah, it is quantitatively if you look at it, it is. I mean the numbers don’t lie,” Fauci said.

“Every country has suffered. We, the United States, has suffered… as much or worse than anyone.”

The US has less than 5 per cent of the world’s population but 25 per cent of all coronavirus infections and 22 per cent of global deaths, according to data from Johns Hopkins Medicine.

Eight months into the domestic outbreak, new cases in the US are topping 60,000 a day, down from a peak of over 70,000 in late July. Cases are rising in more than half of all US states and deaths are on the rise in 35 states. Daily deaths have climbed past the 1000 mark in the last two weeks.

Europe, China and many other countries that got hit very hard early in the pandemica¿s global march were able to bring their infection curves all the way to the bottom before they took reopening decisions, Fauci explained. That format, he said, was not followed by America.

America was able to bring cases down to a plateau of 20,000 new infections per day but that wasn’t a good enough “baseline” figure, he said.

Speaking to the patchwork response across America, Fauci stated what is clear for the world to see now: America has failed to “row” together.

For one, Fauci said children are certainly not immune to the virus, although they are not getting as seriously ill as adults.

Asked about current knowledge on airborne transmission, Fauci said it’s still not clear how well and how far the virus transmits in an aerosol environment and how we must now define the term aerosol itself, in the context of this virus.

Yet, despite all that is still unknown about the virus, Fauci said outdoor remains far safer than indoor environments and masks do work. Simple actions like keeping windows open, along with social distancing, helps keep transmission rates muted, he said.

“We can do much better, and we can do much better without locking down and I think that strange binary approach, either you lockdown or you let it all fly, there’s some place in the middle when we can open the economy and still avoid these kind of surges that we’re seeing,”

Fauci’s remarks come at a time when Trump and his advisors insist that the virus is under control while hospitalisations and deaths tell an entirely different story.

In Trump’s world, there are “four or five lists” in which America has the lowest numbers.

Trump has made some remarkable comments about the state of play of the virus in America. Most recently, in an interview aired on HBO, he has gone from claiming credit for America’s “fantastic” testing numbers to saying “It is what it is” as an explanation for the catastrophic American experience with the coronavirus pandemic so far.

According to data from Johns Hopkins, America is currently recording 47 deaths per 100,000 people. The US has a 3.3 per cent case fatality ratio – which is deaths per 100 confirmed cases.

The coronavirus is blamed for more than 4.8 million cases in the US and more than 157,000 deaths till date.