Jayashree Devanand Parab, Sarpanch Village Panchayat, Pissurlem Village mentioned, "Village Sarpanchs, Workers' Associations and representatives of various Truck Associations and other ancillary bodies have come together to discuss the gravity of the situation. The morbid condition of the people and business owners post the Mining stoppage is getting scary affecting the basic needs of famiies. 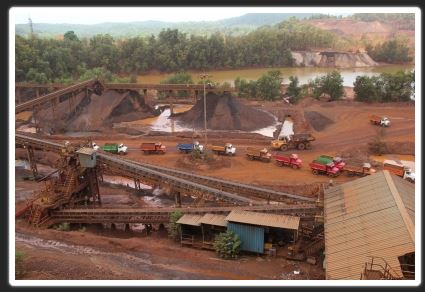 625
VIEWS
Share on WhatsappShare on FacebookShare on TwitterShare on Telegram

Panaji, (Aryavarth) The representatives of 26 Village Panchayats from the mining areas of Goa have made an appeal to the apex court of India, to take the matter of Goa Mining resumption on urgent basis and provide the much needed relief to the Goa mining dependents.

The representatives of the village panchayats from affected villages due to Mining stoppage, claim that the Goa Mining industry has been consistently misrepresented in various government departments and the judiciary. These representatives earlier filed a representation to the Supreme Court of India demanding a solution to the grave situation witnessed by people of Goa since past 40 months. They further explained that immediate resumption of mining is the only tangible solution to the devastating effects of Goa Mining Stoppage disrupting over 3 lakh livelihoods followed by the hard hitting impacts due to COVID pandemic on Tourism sector which further added to the sufferings of Goans.

Jayashree Devanand Parab, Sarpanch Village Panchayat, Pissurlem Village mentioned, “Village Sarpanchs, Workers’ Associations and representatives of various Truck Associations and other ancillary bodies have come together to discuss the gravity of the situation. The morbid condition of the people and business owners post the Mining stoppage is getting scary affecting the basic needs of famiies. The picture of AatmaNirbhar Bharat painted by the Prime Minister seems to have become a non-starter in Goa since people have no business to run and the two biggest job providing sectors are at the lowest point. The first Covid wave had ruined the Tourism industry which with time was crawling to stand up again but the second wave completely tarnished it. The socio-economic thread of the mining belt is in its worst state and we hope that the 3rd wave do not strike as it will completely destroys our village economy leaving us helpless without mining income. We are praying to the Supreme Court to take a lenient view on mining in Goa and give direction favourable to revive the livelihood through mining. It will be devastating if mining does not start in coming season.”

The mining stalemate in Goa has completed its third year due to the Policy paralysis, with no concrete solution in the site for the stalemate. There is an utter need to immediately resume mining in the state to mete out the disparity prevailed due to the policy misinterpretation & Legal flaws. The stoppage of mining in Goa has not only brought economic instability in the mining belt of the state but also wrenched off confidence of people for planning to educate their children. There is a rise in the number of domestic violence cases in local households. Our trucks and machineries are lying idle from past 3.5 years and the debts are increasing manifold leading tension in the households. The long time idling of trucks and machineries is causing rusting of valuable infrastructure and who will give us money or loans to repair or replace this machinery when mining resumes again. The delay in restarting mining is affecting common mining dependent people because there is no other alternate livelihood to compensate the mining earnings. The situation is that the state Government looks totally lost on the matter of loss of livelihood, so the panchayats are approaching the court begging for our livelihood as a last resort ” added Swati Tilve, Sarpanch, Village Panchayat Dharbandoda.

According to a report submitted by State’s Tourism Ministry in December 2020, Goan Tourism has suffered losses to the tune of Rs 7,000/- crore; with recorded job losses in the range of 35 per cent. With the second wave of pandemic the entire structure of the state’s economy and livelihood of the people has fallen apart, Considering the situation of Grave concern in the state, immediate Resumption of Goa Mining will help in bringing back the state on the track.